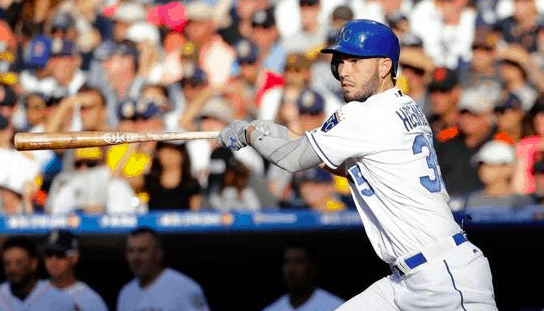 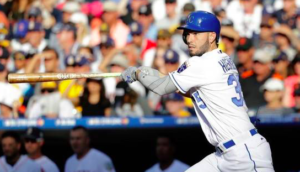 A pair of teammates from the reigning world champion Kansas City Royals were at the forefront of making sure the American League remained champions of the All-Star Game. Royals first baseman Eric Hosmer was named All-Star Game MVP, while Royals catcher Salvador Perez also played a key role in the American League’s 4-2 win over the National League Tuesday night in San Diego. It was the fourth consecutive All-Star Game win for the A.L., who once again will have home field advantage in the World Series.

Both Hosmer and Perez homered in the bottom of the 2nd inning to give the A.L. Team a lead it would not relinquish. Hosmer’s home run tied the game, matching a solo home run from Kris Bryant in the 1st inning that gave the N.L. an early lead. Five pitches later, after Mookie Betts reached base on a single, Perez homered to give the A.L. a 3-1 lead. Both home runs came off former Royals pitcher Johnny Cueto, who took the loss in Tuesday’s game. Cueto, who now pitches for the San Francisco Giants, suffered just one loss during the first half of the season.

“This morning, I got up and didn’t feel well. That is not an excuse,” Cueto said after the game. “I just left two pitches up, and that was the story.”

In the third inning, Hosmer drive in the A.L.’s fourth run of the game on a single. His 2 for 3 performance, including 2 RBIs, was enough to get him MVP honors. He’s the first Royals player to win All-Star Game MVP since Bo Jackson did it in 1989. “This whole week, this whole San Diego All-Star Game has been unbelievable,” Hosmer said. “It’s a dream come true, and it kind of felt like my first big league homer right there. It was special.”

The N.L. threatened with run-scoring opportunities at times, but the A.L.’s contingent of late-game relievers was able to close the door and finish off the game. Kelvin Herrera cruised through the 6th inning on just eight pitches, while Dellin Betances lit up the radar gun during a scoreless 7th innings. In the 8th inning, Andrew Miller got into some trouble, ultimately loading the bases, but Will Harris entered to bail him out, striking out Aledmys Diaz on a called third strike. Zach Britton pitched the 9th inning for the A.L. and earned the save.

The save from Britton locked up home field advantage for the A.L. representative in this year’s World Series, a fact not lost on the players, especially with nine of the last 13 World Series winners benefiting from having home field since the All-Star Game started being the deciding factor. “We don’t know who is going to be representing the American League, but we know how much that home-field advantage helped us,” Hosmer said. “We’re glad that we could secure it for the American League. It’s something we all set out to accomplish before the game started.”

Of course, the most memorable moment of the night may have been the ovation received by David Ortiz, who was playing in his final All-Star Game. After drawing a walk in the 3rd inning, Big Papi was lifted for a pinch runner, and in addition to receiving wild applause from the San Diego crowd, his A.L. teammates joined him on the field to wish him farewell. “It’s something that I’ll never forget, when you see all your boys,” Ortiz said. “Pretty much everybody in this dugout has been related to me one way or another.”