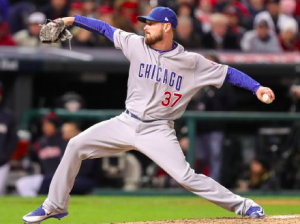 One of the last remaining free agent pitchers who has a chance to make an impact in 2017 is officially off the board. The Kansas City Royals have agreed to a deal with lefty Travis Wood. The deal is pending a physical and reportedly a two-year deal with $12 million guaranteed.

Wood was reportedly seeking a team that would allow him to return to being a starting pitcher. He worked exclusively as a reliever with the Chicago Cubs last season, posting a 2.95 ERA during the regular season before making nine appearances during the postseason, playing a role in Chicago winning the World Series.

In 2015, Wood made nine starts and 45 relief appearances for the Cubs. However, in the three years prior to that with the Cubs, Wood was a full-time member of Chicago’s starting rotation, making 89 starts during that span. In his final year as a full-time starter in 2014, Wood was just 8-14 with a 5.03 ERA, which may have inspired the Cubs to move him to the bullpen the following year. The Cubs were reportedly interested in re-signing him, but there appeared to be little chance he would fit into Chicago’s starting rotation this year.

Of course, Wood may not be guaranteed a spot in Kansas City’s starting rotation either. He is the second starter the Royals have signed this month after they signed Jason Hammel last week. Unfortunately, the Royals needed to start looking at starting pitchers after the tragic loss of Yordano Ventura in an automobile accident last month.

As it stands, Hammel joins Danny Duffy, Ian Kennedy, and Jason Vargas as starters who are likely guaranteed a spot in Kansas City’s rotation this year. This leaves the fifth spot open for Wood to take. However, he won’t be the only one competing for the last spot in Kansas City’s rotation during spring training. The Royals have high hopes for Nathan Karns, who was acquired from the Mariners earlier this winter. Veteran Chris Young will also be involved in the competition, as will lefty Mike Minor.

Health could end up being a factor in the rotation competition, which could play to Wood’s advantage. Vargas only returned from Tommy John surgery late last season; Karns missed the second half of last year with a back issue; and Young is also an injury risk at 37-years old. Wood, meanwhile, has never been on the DL during his big league career.

On the surface, Wood has as good a chance as anybody to win the final spot in Kansas City’s rotation. However, part of his appeal is that the Royals know he can be an asset out of the bullpen if there’s no room for him in the rotation. Kansas City’s bullpen has lost several key pieces over the last couple of years, including former closers Greg Holland and Wade Davis. Wood obviously won’t become the team’s closer, but he would provide a reliable set up man for the Royals.

Like many of Kansas City’s moves this offseason, the addition of Wood is a meaningful step in the right direction. Either he will help to fill out a spot in the rotation created by the sudden loss of Ventura, or he will become a key setup man. Wood is coming off an impressive season with the Cubs and should be a steady contributor on a team hoping to compete for a playoff spot in 2017.