"Mr. Price has been given the "Billy Walters treatment" by the betting establishments in the Las Vegas area, due to his distinct ability to pick winners and cost casinos millions."
Home
Football
Kellen Moore’s Broken Fibula Puts Cowboys In The Market For A Back-Up Quarterback

When it comes to the Dallas Cowboys, the fate of the team lives and dies with Tony Romo. That much was evident last season after he was injured. While the defense and what quarterback play they got kept them competitive in many games, they still lost without Romo behind center.

The team drafted Dak Prescott as a potential heir to Tony Romo’s throne but held on to Kellen Moore to be his immediate back-up. But now Moore has gone down with a season-ending injury, fractured right fibula, just days into camp (FoxSports). 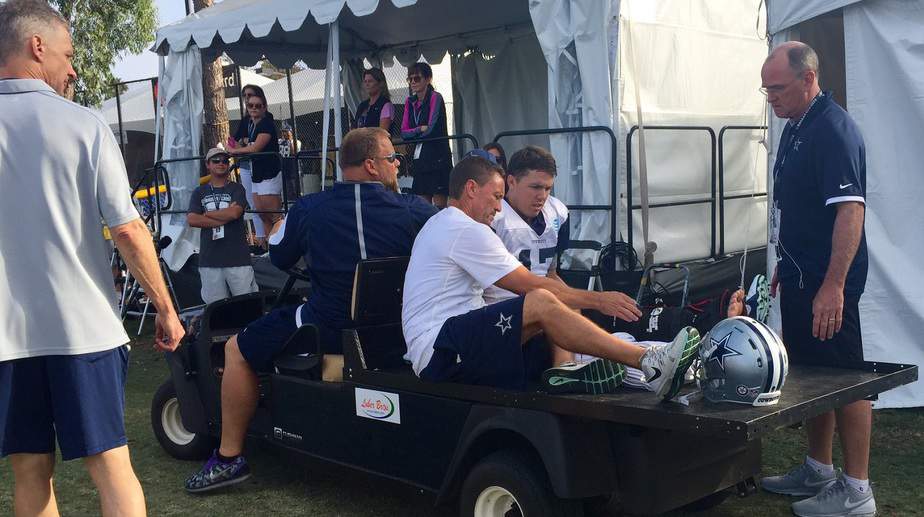 The team knows it can’t trust Romo to remain healthy for the entire season, so they have to have a capable back-up ready to go. Since Moore has gone down now, they have the opportunity to bring someone in that can practice and get reps during the preseason.

It may not matter in the end, but at least the team can say it was as prepared as possible given the circumstances.

The question now is who do they go after? Do they try to trade for someone, stick to the free agent market, or do they get crazy and stay in house?

The following options are the ones getting the most traction online and in the media (FoxSports):

Nick Foles: Rather than sit behind Case Keenum or Jared Goff, Foles gave up $750,000 of the guaranteed money the Rams owed him in order to get released. Why? He still thinks he can play. While he has not looked great since his incredible breakout season in 2013, under the right guidance maybe he can become that guy again.

Then again, maybe that season was a fluke or more a product of Chip Kelly.

Matt Cassell/Brandon Weeden: Both would have to be traded for, but they are familiar with the offense. If called upon, they would be more ready to step in than a lot of guys. Of course, it is important to remember that when called upon last season they were both terrible. But with Jerry Jones you can never rule anything out.

Michael Vick: We already know that Jerry Jones has no problem signing controversial players. Even though he has been out of jail for a few years, many fans still can’t stand Vick. If he could still play like he did back in Atlanta, they might be willing to cut him some slack, but Vick was benched in Pittsburgh for Landry Jones.

That should say something.

Josh McCown: He is not going to light it up, but McCown made the Cleveland Browns look halfway decent last season (at times). Could he thrive with a better team in Dallas? Maybe. However, the Browns will likely not give him up easily with Robert Griffin III’s ability in question.

Johnny Manziel: Because Jerry Jones is the one guy crazy enough to give Johnny Football a shot. Since they’ll only have to pay him league minimum you almost have to say “Why not?”

Josh Freeman: His name has not been mentioned much, but it should be. His limited time with the Indianapolis Colts last season should be enough to have teams thinking about him at least.

The bad thing about trading for someone or picking up a free agent is that there is a good reason why they are not starting or not signed to a team. By going either route, the Cowboys will pretty much be forced to go with the bottom of the barrel.

However, while having a veteran back-up would be nice, it isn’t necessary. Rookie Dak Prescott was a Heisman candidate and one of the top quarterbacks in the SEC for the last few years. If they start giving him reps now, he could be ready to step in should Romo go down.

The team has former UTEP and Texas A&M quarterback Jameill Showers on the roster as well. He had some promising moments during the preseason last year, but not nearly enough to think he’s ready for action. So if they do decide to stay in house, it appears that they will be going with the rookie.