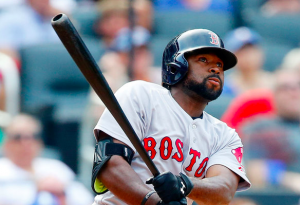 After being held out of action on Sunday and Monday due to a sprained knee, the Boston Red Sox formally placed center fielder Jackie Bradley Jr. on the 10-day DL Tuesday afternoon. The Red Sox believe that Bradley’s injury will be a short-time issue, and while doing so is playing it safe, placing him on the DL adds another name to what has been a crowded list of injured and sick players early in the season.

Bradley sprained his knee as he casually rounded first base on a routine fly out during Saturday’s loss to the Detroit Tigers. His left foot got caught in the ground while running on the infield dirt, causing him to fall awkwardly on his right knee. Bradley was initially optimistic that he would be back in the lineup sooner rather than later. However, after not playing Sunday or Monday and undergoing an MRI that showed inflammation around his knee, the Red Sox have decided it’s best to let him sit for at least 10 days to avoid any complications.

“When he’s first ready is when he’ll be back in the lineup,” said Red Sox manager John Farrell said Tuesday. “I don’t have the full report from (Red Sox orthopedist) Dr. Asnis, but the decision was made — he’s going to need some time. Hopefully it’s just the 10 days. We’ll see. He’ll be out there first available.”

The injury to Bradley came at a bad time for the Red Sox. Right fielder Mookie Betts and DH Hanley Ramirez have both missed time over the past week due to the flu virus, which is running rampant throughout Boston’s clubhouse. Xander Bogaerts has also been away from the team while on the bereavement list, creating several sizable holes in Boston’s lineup and playing a role in the Red Sox losing three of their last four games.

Fortunately for the Red Sox, Bogaerts will be activated from the bereavement list in time for Tuesday’s series opener against the Baltimore Orioles. Meanwhile, Betts has been healthy enough to play the last two days, although he’s gone hitless in both games. Ramirez is also set to return to the lineup Tuesday, meaning the Red Sox will be at full strength aside from the absence of Bradley, who hopes to return from the DL soon after he’s eligible on April 19.

“Everything points in that direction right now,” Farrell said. “So again, I don’t have the all information to give you a time frame. I know Jackie, as tough a kid as he is, he’ll want to play soon.”

With Bradley on the DL, Andrew Benintendi will take over the duties in center field, which is his natural position. Meanwhile, Chris Young and Brock Holt will deputize in left field, most likely in a straight platoon. Neither Young or Holt is off to a great start in limited action, although both are more than capable of filling in as long as Bradley is out

Having everyone else back in the lineup should soften the blow of losing Bradley for the Red Sox. However, he’s such a key figure both offensively and defensively that it’ll be almost impossible for Boston not to feel his absence, even if he misses the minimum of 10 days. The Red Sox haven’t exactly sprinted out of the gate this season, and health issues invovling players like Bradley are a big reason why. With Bradley officially on the DL, the Red Sox will have to continue waiting to get their best lineup on the field.