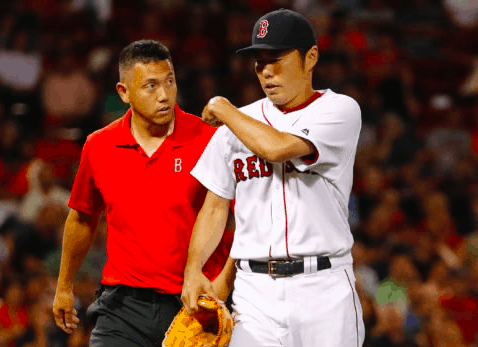 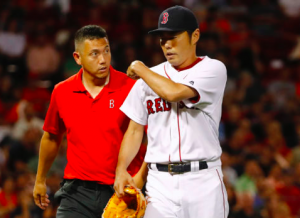 The Boston Red Sox fears about reliever Koji Uehara were confirmed Wednesday when an MRI revealed a strained pectoral muscle. Uehara left Tuesday’s game against the San Francisco Giants clutching his right arm seven pitches into his outing. He’s been placed on the 15-day DL The injury to Uehara throws a wrench into a Red Sox bullpen that was already in flux following the loss of Craig Kimbrel for three to six weeks due to a knee injury, forcing Uehara to take his place as the team’s closer.

“It obviously confirms a strain,” Boston manager John Farrell said about Uehara’s MRI Wednesday night. “To what extent, we’re still getting our arms around that. This is a unique injury for a pitcher, so the best thing I can tell you is the MRI does confirm the strain.” Even with Farrell not giving a specific timeline, it may be fair to say the Red Sox don’t expect getting Uehara back too soon.

With Uehara joining Kimbrel on the DL, newly acquired Brad Ziegler will now step in as Boston’s closer. “Ziegler will be our closer,” Farrell said, “but there may be some left-handed situations that if we’re facing a string of left-handers, there could be other options in our bullpen to close out. I don’t want to just rule that out, but as far as building a game and working back to a closer, it’s Brad in that spot.”

Before being traded to Boston, Ziegler had 18 saves in 20 chances for the Arizona Diamondbacks this season after recording 30 saves for the D’Backs last season. Ziegler said he will have no trouble adjusting back to being a closer. He’s also believes he’ll have a higher ground ball rate now that he’s not pitching in so many parks that are at elevation, as is the case in the NL West. “It might help me being in a place that’s at sea level with humidity,” Ziegler explained.

Even with an experienced closer like Ziegler ready to step into that role, the depth in Boston’s bullpen has taken a serious hit over the past couple of weeks with the loss of both Kimbrel and Uehara in short order. The team expects to activate Junichi Tazawa from the DL on Friday, which should help to reinforce the back end of the bullpen. The Red Sox are also expecting Joe Kelly to return to Boston as a reliever at some point this season. Kelly struggled mightily in six starts this season but appears to be adjusting well to a relief role in the minors.

The Red Sox are holding the slimmest of leads atop the AL East, as they enter Thursday a half game up on the Baltimore Orioles and a full game ahead of the Toronto Blue Jays. However, trouble in the bullpen could end up being making a significant difference in such a tight race. The acquisition of Ziegler now looks like a brilliant (serendipitous) move, but with both Kimbrel and Uehara on the shelf, the Red Sox will need others to step up and solidify their bullpen until their top relievers can return from injury.