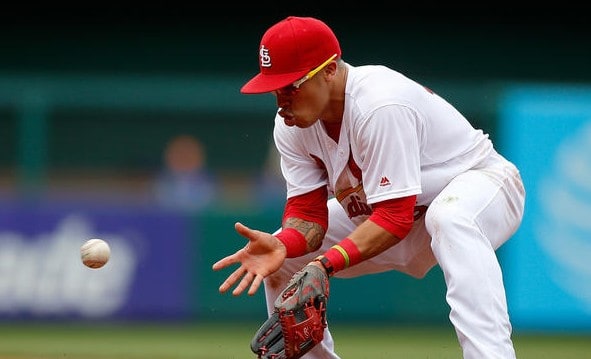 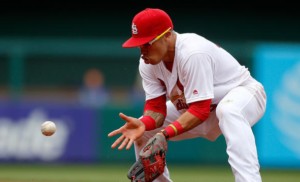 Less than two weeks after what had to be an embarrassing demotion to triple-A for Kolten Wong, the St. Louis Cardinals have called him back up to the big leagues in time for Friday’s game against the AL West leading Texas Rangers. The Cardinals are bringing Wong back, at least in part, to play in the outfield, as they have demoted reserve outfielder Jeremy Hazelbaker to triple-A to make room for Wong on the active roster.

Wong was sent to the minors on June 6 when the Cardinals activated Jhonny Peralta from the DL. With Aledmys Diaz emerging at shortstop, Peralta has been forced to play third base, shifting Matt Carpenter to second base, leaving Wong without a position. With Wong hitting just .222 with four extra-base hits through 49 games, the Cardinals demoted him to triple-A despite signing him to a long-term contract over the winter.

Now Wong is coming back to St. Louis after a brief spell in the minors, and he’s expected to split time in center field with Randal Grichuk. After a breakout season in 2015, Grichuk has struggled this season, hitting just .209. Wong played three games in center field during his recent stint in triple-A, the only three games he’s played in the outfield during his pro career. Offensively, Wong’s time in the minors suited him well. In just seven games, Wong hit .429 with four home runs. Obviously, that is a small sample size, but clearly he returns to the Cardinals swinging a hot bat.

“He went down with the right perspective, the right attitude to go get better,” said St. Louis manager Mike Matheny on Wednesday before Wong’s promotion was announced. “He’s working hard at whatever he needs to do to be the best player he can be. It’s nice to see that he’s been open to the idea of playing in the outfield and in the meantime really working to figure out a nice spot with his swing.”

Matheny also insinuated that Wong playing in the outfield has always been part of the team’s plan. “It’s something the organization saw as potential to help him and his versatility,” the manager says. “That’s kind of what our club’s all about right now. Guys who are able to play multiple positions give themselves a chance to help us in ways you might not see as obvious.”

Wong’s demotion to triple-A never seemed like a permanent move, and less than two later he’s already back in the majors, only now in a different role. Whether Wong will be able to transition into playing in the St. Louis outfield regularly after just three minor league games as an outfielder remains to be seen. But this is his opportunity to redeem himself after a poor two months to start the season, and this is Wong’s chance to have a positive impact on the Cardinals in 2016.