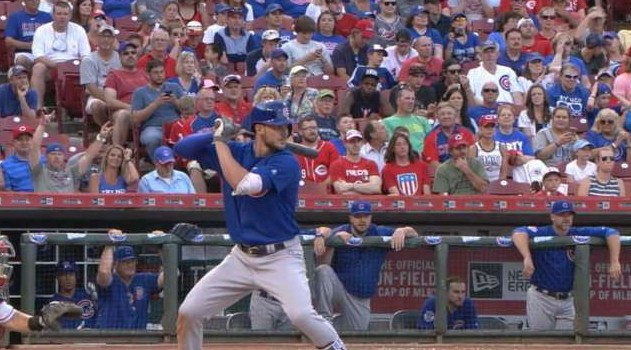 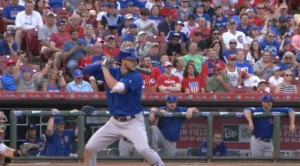 Chicago Cubs third baseman Kris Bryant made baseball history Monday night while helping the Cubs to an 11-8 win over the Cincinnati Reds. Bryant became the first player in the modern era, which dates back to 1913, to hit three home runs and two doubles in one game. It was the first time Bryant had five hits in a game, as well as his first ever three-home-run performance.

“The best game of my whole life, obviously,” Bryant said afterwards upon hearing that he was the first player to ever have three homers and two doubles in the same game. “To hear that, there’s so many good players in this game, it’s just, I feel so fortunate, so thankful for this opportunity to play on a stage like this every day, and I give it my all and I make the most of every opportunity I get. To hear that, it keeps you coming back.”

For Bryant, the game almost came out of nowhere, as he’s struggled at the plate over the last couple of weeks, hitting .167 in his previous 13 games going into Monday’s game. “I haven’t really felt 100 percent in terms of my at-bats,” he explained. “Just kind of grinding them out. But, I don’t know what happened tonight. It was just, I figured the last couple weeks haven’t been what I wanted, so I figured, you know what, I’m due. Throughout my whole life, I’ve always been that way, whereas when I’m struggling, I just tell myself I’m ready for a big game, and I guess tonight was the night.”

When it came to his three home runs, there was no doubt about any of them, as all three traveled more than 400 feet. After his third home run of the night, which Bryant hit in the 8th inning, a strong contingent of Cubs fans in Cincinnati began clamoring for a curtain call. Bryant resisted doing so despite a few of his teammates urging him to take it, and ultimately he was let off the hook by Anthony Rizzo hitting a home run of his own.

“Guys were pushing me out, but I’ve never been the type to show up an opponent or anybody. I don’t think that’s ever happened in baseball and I definitely didn’t want to be the first,” Bryant said about taking a curtain call as a visiting player. “I’m just not that type of player. I’m glad my teammates are having fun with it. I’m glad there are a lot of Cubs fans here, but I’m not that guy.”

The Cubs ended up needing all five of Bryant’s hits to secure the win over the Reds, and if that weren’t enough, he also helped the team by moving around to three different positions during the course of the game. A performance like that will be tough to top, but Bryant appears to have a long and fruitful career ahead of him, so it’s not hard to imagine him doing something even more spectacular one day. For now, he’ll likely be satisfied with his 5 for 5 performance in Cincinnati Monday night.