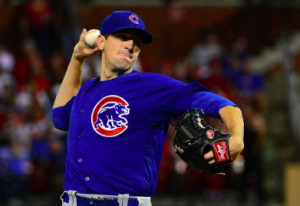 With three weeks left in the regular season, Chicago Cubs starter Kyle Hendricks began his final statement to the jurors who will decide if he’s worthy of winning this year’s Cy Young Award on Monday night, and he began it by nearly pitching a no-hitter against the St. Louis Cardinals. Hendricks carried a no-hitter into the 9th inning, only to have it and his shutout broken up by a home run from Jeremy Hazelbaker. Nevertheless, it was a big statement to Cy Young voters from the soft-tossing righty.

“Unbelievably great,” Cubs manager Joe Maddon said about Hendricks’ performance after the game. “They did not have a good swing against him all night. He was in charge of that entire game. It has to catapult him in the minds of people voting right now. That was spectacular.” Of course, Maddon is forgetting the one good swing that Hazelbaker had to break up the no-hitter on a changeup that was left up in the zone.

Maddon likely forgot Hazelbaker’s home run, as he was soon ejected from the game. Home plate umpire Joe West did not appreciate Maddon instructing his infielders to waste time while Aroldis Chapman warmed up in the bullpen so he could relieve Hendricks after he lost his no-hit bid. However, other than the home run from Hazelbaker and the ejection of Maddon, it was a near perfect night for Hendricks and the Cubs.

“I was pretty calm,” Hendricks said afterwards. “I was definitely thinking about it from about the fifth inning. Guys started getting quiet, not talking to me.” With a strong defense behind him, Hendricks wasn’t afraid to pitch to contact, allowing the team behind him to do the rest.

Hendricks was actually a little surprised by his performance, telling the media afterwards: “My pregame bullpen was probably the worst I had all year.” However, when the game started, Hendricks was able to find the corners and keep the Cardinals from making hard contact, inducing plenty of ground balls.

“After the second inning, he got on track,” explained Cubs catcher Miguel Montero. “He was painting the corners, pitching at the bottom of the strike zone. That’s the best I’ve seen him.” Montero also praised Hendricks for his pre-game preparation. “He’s the best prepared guy every time before he takes the mound,” he said. “He’s the best prepared of anyone I’ve caught in my career.”

In the end, Hendricks didn’t quite complete his no-hitter, but eight innings of no-hit ball against a team that’s chasing a playoff spot and unwilling to give away any at-bat at this point in the season is still quite impressive. It may have been exactly what Hendricks needed to make sure he’s on the mind of Cy Young voters, convincing them what Maddon and the Cubs already believe, which is that he’s the best pitcher in the National League.