Kyle Schwarber Could Hit Lead Off, Catch for Cubs in 2017 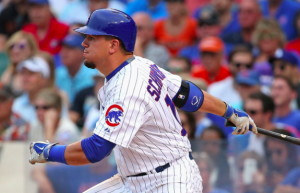 Despite coming back in time to be part of the Chicago Cubs team that won the World Series, a knee injury in early April deprived Kyle Schwarber of spending his first full season in the big leagues in 2016. However, Schwarber will get another chance at his first full year as a major leaguer in 2017, and he may be spending that year as Chicago’s leadoff hitter. Also, if Schwarber has his way, he’ll also spend part of the year behind the plate.

While speaking to a crowd of fans earlier this week, Cubs manager Joe Maddon took his first crack at putting together a lineup card, at least against a right-handed starter, during the 2017 season. That lineup included Schwarber in the leadoff spot, which naturally raised a few eyebrows. However, Maddon was serious about Schwarber hitting leadoff if the pitcher is batting in the 8th spot.

“There is the consideration with Schwarber hitting first you want to hit the pitcher eighth again,” Maddon said. “There is that kind of consideration. I’ll give that to the (Cubs analytics team) to look at. You want to feed Schwarber as much as you can.”

In the past, Maddon has been unafraid to bat his pitcher 8th. It also wouldn’t be difficult to foresee the Cubs placing either the newly signed Jon Jay or Albert Almora Jr., who are expected to platoon in center field, in the 9th spot of the lineup. With Dexter Fowler leaving Chicago and signing with the St. Louis Cardinals, the Cubs will have a new leadoff hitter one way or another.

Maddon seems determined not to disrupt to the trio of Kris Bryant, Anthony Rizzo, and Ben Zobrist in the 2, 3, and 4 spots of the lineup, respectively, seemingly taking Zobrist out of consideration for the leadoff spot. Jay and Addison Russell would appear to be the other candidates, although Schwarber’s career on-base percentage is higher than either player posted last season.

Perhaps most importantly, Schwarber appears to be onboard with the idea of hitting leadoff, something he did twice in 2015. “I’m open to it,” he said. “I know I hit there for two games. It’s just another spot in the order. Once that first spot is done, you can hit eighth or third.” In those two games, Schwarber was 3 for 8 with a stolen base and two runs scored.

But the leadoff spot isn’t the only thing on Schwarber’s mind this offseason; he’s also hoping for a return to his position behind the plate. The knee injury limited him to a DH role in the postseason, but even at the start of the 2016 season, Schwarber was pencilled in to see most of his playing time in the outfield.

With Willson Contreras emerging the second half of last season and Miguel Montero under contract for another year, Schwarber is third on the depth chart at catcher. However, he’s hoping to prove to the Cubs during spring training that he deserves to see more time behind the plate. “(The Cubs) have a plan,” Schwarber acknowledges. “I’m going to follow the plan, but I’m going to stick to my guns (to catch).”

Whether the Cubs give Schwarber regular playing time behind the plate in 2017 remains to be seen, but there’s no denying that he’s a big part of the team’s plans and has a chance to play a key role in any success the reigning world champions have this year. Nothing is set in stone, but there’s certainly a chance that Schwarber ends up spending plenty of time as a catcher and a leadoff hitter in 2017.