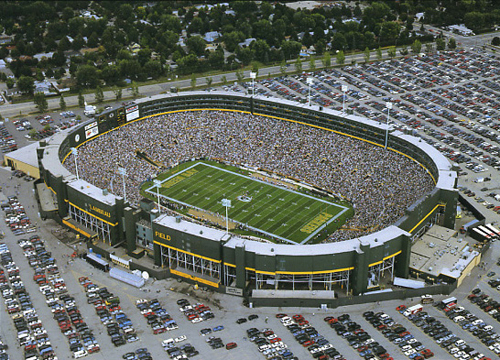 Lambeau Field is the home of the NFL’s Green Bay Packers and located in Green Bay, Wisconsin. The stadium opened in 1957, originally named City Stadium, and more commonly referred to as New City Stadium. In August 1965 the stadium was renamed to Lambeau Field, after the late Curly Labeau, who not only founded the Packers, but also played and coached them, as well.

In the Summer of 2013 the stadium finished its latest renovations by adding 7,000 seats in the south endzone. 1,600 of those 7,000 were either club seating or in luxury suites.

Lambeau Field is the oldest continually used stadium by an NFL team. While stadiums like the Chicago Bear’s Soldier Field is older, it was not the home of the Bears till 1971. And in 2016, the LA Memorial Stadium which will be home to the LA Rams, is also older than Lambeau Field, but has not seen consistent NFL action in decades.

The street on which the stadium is located was changed to 1265 Lombardi Avenue in August of 1968 in honor of the great, former headcoach Vince Lombardi.

Known for its extreme temperatures in Green Bay, an old, throwback feel of the stadium, as well as one of the best fanbases in football, Lambeau Field is considered to be one of the best homefield advantages in the modern day NFL.

• Beginning in 1925, the Packers sought a new stadium to play their home games in as opposed to old City Stadium which only seated 25,000 fans. It wasn’t until 1950, when the stadium was considered no longer up to the playing standard of most NFL teams that they took the steps to construct a new field.

• Lambeau Field originally opened as City Stadium and was opened on September 29, 1957 with the Packers defeating the Chicago Bears by a final score of 21-17 in front of a crowd of 32,132.

• In 1953 the city of Milwaukee built a stadium twice the size of old City Stadium in hopes of attracting the Packers away from Green Bay.

• In August of 1955 the Packers announced plans for a new stadium in Green Bay with the planned capacity of 32,000.

• The cost of the new City Stadium, which was later named Lambeau Field was $960,000. It was the first stadium built specifically for use by an NFL team.

• The Packers played two to three home games a year in Milwaukee until 1995 when Lambeau Field made it financially realistic to play all of their regular season home games in Green Bay for the first time in 60 years.