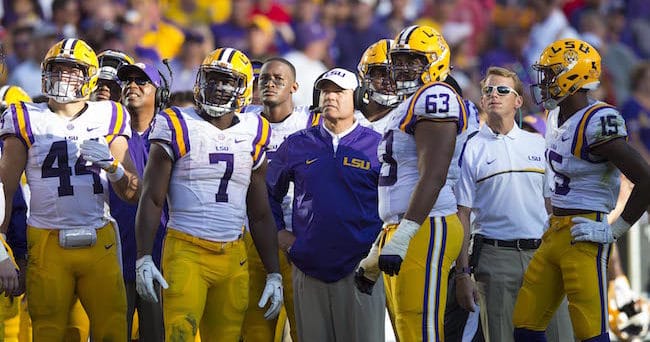 After 12 seasons, 114 wins, and a national championship, the University decided a 2-2 start with a team loaded with talented veterans was not good enough for Miles and Cameron to retain their jobs.

In spite of all the success that Miles had with the Tigers, it is hard not to agree with the call. While the Tigers have remained good throughout his tenure, just being good is not good enough for LSU. They want to compete for the national title, and for the last few years that has not been the case.

LSU started this season as a legitimate national title contender and the preseason No. 5 team in the nation, but then lost to an unranked Wisconsin team in the season opener, beat Jacksonville State (who they should have killed), held on to beat Mississippi State, and then lost to Auburn.

They should have killed Jacksonville State and Mississippi State. Had they beaten Auburn, they would have at least stayed in the conference hunt with a slim chance of getting back into the national title picture.

They had a chance. Down by five and with 75 yards to go in less than three minutes, it didn’t look good for LSU. But then quarterback Danny Etling decided to pick that moment to play his best football and led the offense on a nice drive down the field. For a moment it even appeared as if he guided the team to the winning touchdown after completing a pass to D.J. Shark in the back of the end zone–on a play that started with just a single tick on the clock!

“I don’t know if I’ve ever come as close to winning a game and finishing second as today,” LSU coach Les Miles said.

Talk began to spread online how it had been a mistake to retain Miles after last season and that he should have been fired then. Unless he took the team to the CFB playoffs somehow this season, he would certainly be let go after this year.

By Sunday morning, the talk turned into a legitimate chance he could be let go on Monday. After a discussion between LSU athletic director Joe Alleva, school President F. King Alexander and other university leaders, the decision was made, and the ax was dropped Sunday afternoon.

Defensive line coach Ed Orgeron has been named the interim head coach (Advocate). Orgeron has served as a head coach in the past, first at Ole Miss and the more recently at USC. He went a dismal 10-25 in three seasons with the Rebels. He took over at USC after Lane Kiffin was fired and guided the team to a 6-2 finish to the season, 9-4 overall.

USC decided to hire Steve Sarkisian instead, and he resigned before the team’s bowl game.

Orgeron’s experience with taking over the head coaching job during the season probably factored into the decision to give him the interim position. For him to retain it, he is going to have to figure out how to do something Miles and Cameron couldn’t: find a diamond in the rough among the lumps of coal the team currently has at quarterback.