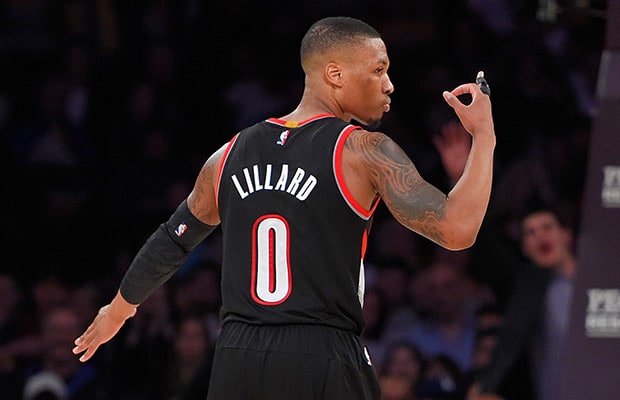 With Golden State in a commanding 2-0 lead in the Western Conference semifinal series, game 3 was seemingly a must-win game for the Trail Blazers who let a win in Game 2 slip through their grasps in the closing minutes.

Damian Lillard scored a playoff-best 40 points to help lift his Blazers over the Warriors by a final of 120-108 Saturday night, putting the Blazers right back in the series at a 2-1 game deficit.

“I think we played a lot smarter down the stretch than we did the last game, and we challenged them,” Lillard explained. “Last game, I think, we played good, and then we let up a little bit, and they turned it on — like championship teams do. … Tonight, we didn’t allow that to happen. We kept doing what was working for us.”

Golden State was once again without reigning MVP, Steph Curry, who’s missed time since spraining his right knee during Game 4 of the their series against the Houston Rockets in the opening round of the playoffs.

Damian Lillard got help from Al-Farouq Aminu who had 23 points with 10 rebounds, as well as C.J. McCollum who added 22 points of his own for Portland. They took a 58-46 lead into the half, and kept the hot-hand into the second half by stretching the margin to as much as 20 points during the fourth quarter.

In absence Steph Curry’s absence, Draymond Green scored 37 points, while Klay Thompson had 35 of his own for the Warriors.

The Blazers will try to carry their momentum into Game 4 which takes place in Portland on Monday night.

“Now they’re feeling like they can do it,” Draymond Green said about the Blazers. “We know otherwise. You can expect Game 4 to be a battle.”

After a big letdown in the fourth quarter of Game 3 which saw the Blazers blow an 11 point lead by getting outscored 34-12 in that final quarter, the Blazers are still very much in this series. They’ve already came back from a 2-0 game deficit earlier during these playoffs against the LA Clippers in the opening round, and which Game 4 to be played on their home floor, they’re poised to make things interesting if they can even up the series Monday Night.