Looks Like There Are Six Candidates For The Kevin Durant Sweepstakes 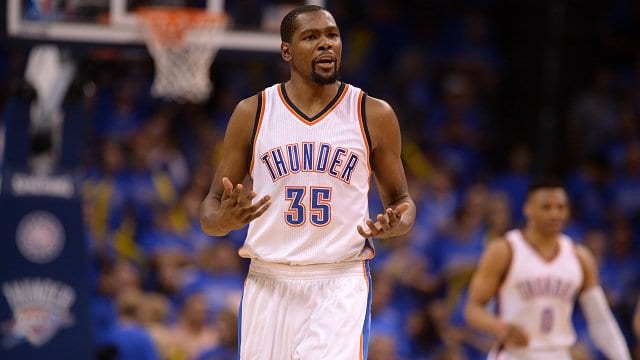 Sometimes the NBA season is not always the most entertaining aspect of the NBA. Yes, it is what a whole bunch of really tall guys are paid millions to do—but the game isn’t always as entertaining as we’d like it to be. Heck–Game Seven was the only one of the Finals worth watching.

While the game isn’t always great, we can typically count on the off-season to be pretty awesome. There will be at least one marquee free agent on the market that will want to be courted by whatever team he is going to sign with.

The courtship for that guy—well, it is usually pretty entertaining to watch play out. If not for what the teams do to entice the player of the day to sign, but what fans and local businesses will offer if he does.

This year’s free agent market is going to have a number of talented players, but the one every team is going to be fawning over is Kevin Durant. The former MVP is going to be on the market for the first time in his career, and he plans on enjoying the attention.

If you believe what the rumor mill tells you, six teams are expected to vie for his services. The Washington Wizards are not expected to have a chance even though his former coach is now in charge and it’s his hometown team. Should he go with the New York Knicks, Lil B will finally lift the dreaded Based God Curse, but they aren’t expected to be a serious candidate either.

Oklahoma City Thunder: a player’s current team is typically a favorite unless they suck. The Thunder were a game away from making the Finals this season. They will be without a key player in Serge Ibaka next season, but they got a pair of pretty good ones in Victor Oladipo and Ersan Ilyasova for him.

Durant has said his decision will be based on basketball. So will he see the Thunder as being an even better team next year with Ibaka out and Oladipo in? Whether he does could be the key to him returning to Oklahoma City.

Golden State Warriors: For the last two seasons the Warriors have been on fire. However, after losing the NBA Finals in epic fashion, it is clear they need something more than they have. With Durant in the lineup, the Warriors would have a good shot at breaking the single season in record again. Rumor has it if he doesn’t return to the Thunder, he is interested in joining forces with the Splash Brothers.

San Antonio Spurs: The Spurs didn’t look like the dominant team fans have come to know and love in the Western Conference Semifinals. The older veterans looked like the ran out of gas. They have a talented young duo in Kawhi Leonard and LaMarcus Aldridge, but the team’ best asset is head coach Gregg Popovich.

Popovich is one of the best in the business and knows how to do what Durant wants to do most—win championships. However, Durant will not be able to make as much if he signs with the Spurs as he could with other teams.

Durant’s agent is supposedly working on meetings with the Boston Celtics, Los Angeles Clippers, and Miami Heat. Boston may be going after Al Horford as well who Durant has expressed an interest in playing with him. The Clippers are rumored to be possibly interested in doing a Blake Griffin for Durant deal. A Durant-Chris Bosh-Dwyane Wade trio would make the Heat a contender, but Bosh’s health may keep him from ever playing again, and Wade is not as spry as he used to be either.

With as close as the Thunder came to making it to the Finals this year it would not be shocking to see him sign again. However, if he does, with Russell Westbrook scheduled to become a free agent after next season, he may go with a two-year deal with an opt-out clause after the first. That way if Westbrook leaves he will not be forced to stay behind.