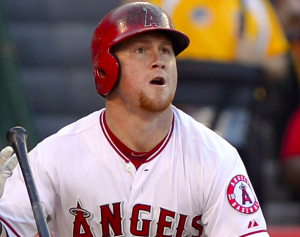 After three solid seasons from right fielder Kole Calhoun, the Los Angeles Angels are ready to commit to three more years of Calhoun in right field. On Wednesday, the Angels announced that they have agreed to a three-year extension with Calhoun worth $26 million. The deal will cover his three arbitration years, keeping Calhoun with the Angels through the 2019 season. There is also a $14 million option for the 2020 season, which would otherwise be his first year of free agency.

Angels GM Billy Eppler says the team is glad to have Calhoun’s financial details set in stone moving forward rather than having to go to arbitration every winter. The team is also confident in Calhoun continuing to produce in the years to come. Calhoun hit .271 with a .786 OPS last season, a follow up to hitting .256 with a career-high 26 home runs in 2015. Calhoun has been the team’s primary right fielder during that span, and he’s expected to fill that role going forward.

“There’s a population of guys in this game — and Kole falls into that population — that as you watch them play more and more, you start to pick up more of the details,” Eppler said Wednesday. “His defense, his baserunning — coupled with what he does in the batter’s box — makes him that complete player and one we’re comfortable in investing in.”

Of course, Calhoun was one of the few bright spots in 2016 on a team that finished 14 games under .500. With the extension, he will officially make the transition from up and coming player to core player. He joins the likes of Albert Pujols, Andrelton Simmons, and Mike Trout as players who are under contract with the Angels for at least three more seasons. With those players all penciled in at their respective positions for years to come, the Angels will look to build around them as they try to put a disappointing 2016 behind them.

From Calhoun’s perspective, the deal is a little odd, as he and the Angels had already settled on a salary for 2017. He will take a slight pay cut this season from what was already agreed upon, but he  also gains financial security for at least two additional years.  “I couldn’t be more excited to continue being an Angel for at least three more years, and hopefully more after that,” Calhoun said. “It’s an organization that I’ve been raised in, I’ve grown in and the only organization I know.”

Calhoun also recognizes the additions the Angels have made this offseason, including Cameron Maybin, Danny Espinosa, and Ben Revere, making him believe the present could be just as promising as the future. “What we’re doing right now and the guys we’ve brought in, we’re excited to get into Spring Training and see what this season holds,” Calhoun said. “But even looking down the road, there’s pieces here and there’s a great nucleus of young guys that I’m really excited about.”

Ultimately, this deal has a chance to work out for both sides. Calhoun may have been able to make more in arbitration the next two years if his performance continues to improve, but with the extension, he does gain financial and job security. For the Angels, they are betting on Calhoun continuing to be an important contributor in the years to come. If that ends up being the case, he’ll likely be worth more than they’ll pay him on this deal, making this extension a wise investment.