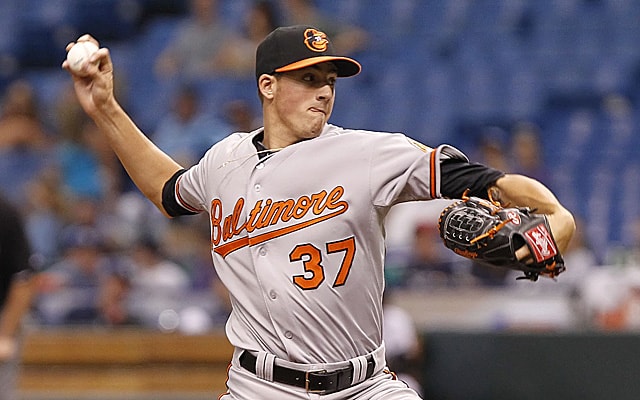 Kevin Gausman gets the start for the Orioles against the Angels’ Shoemaker.

The Baltimore Orioles stand alone in first place of the American League East by one game over the Boston Red Sox as they enter Saturday night’s game against the LA Angels. The Orioles took the opening game of their 3-game set with the Angels last night when Mike Wright for the Orioles defeated Hector Santiago by a score of 9-4.

Los Angeles is currently in 3rd place of the American League Central and 5.5 games out of first. They’ll be sending Matt Shoemaker to the mound Saturday where he’s 2-5 on the year with an 8.50 ERA. He’s been even worse through his last 3 starts, where he’s 1-2 with an ERA of 11.12 and an impressively bad WHIP of 2.207. And even more impressively bad than his last 3 games have been his performances at home where he’s 0-3 on the year with a 14.40 ERA and a WHIP of 2.700, it does not get much worse than that when pitching on your home field.

The Angels will hope that Shoemaker fins his stuff, and he’ll need it as he faces solid right hander for the Orioles, Kevin Gausman. While he’s only 0-1 in his decisions on the year, he carries a 3.00 ERA through 30 innings pitched this season, and has shown great stuff at times.

The Orioles’ lineup has been the difference maker for much of this year, and they’re even slightly better on the road where they average 5.1 runs per game and are hitting 0.275. They’re an impressive 19-10 versus right handers this year and will look to continue that success this evening when they take on Shoemaker and the Angels.

The Angels’ lineup has been solid, as well, especially over the last 7 games where they’re carrying an average of 0.286, but they’re only hitting 0.238 at home. They’ll need some offensive output if they hope to keep pace against the consistent Baltimore lineup Saturday night.