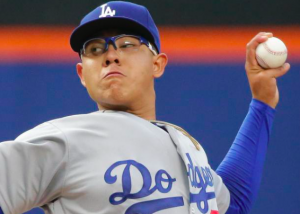 The Los Angeles Dodgers got great contributions down the stretch last season from 20-year old lefty Julio Urias. The rookie from Mexico posted a 1.99 ERA the second half of the season and earned a spot in the team’s postseason rotation. Naturally, the Dodgers are hoping Urias can carve out an even bigger role in their rotation in 2017. However, those plans may need to be put on hold temporarily, as the Dodgers will have to do something to curb Urias’ innings count in 2017, which could delay the start of his season.

According to reports coming out of Los Angeles, one idea the Dodgers are considering is having Urias stay behind in extended spring training instead of starting the season in the majors. In theory, the Dodgers would keep Urias there until May or June, and even after that they could choose to send him to the minors to prepare him for the season.

Urias had such a meteoric rise to the majors that he didn’t have a chance to build up his innings count in the minors the way most pitchers do, and so the Dodgers need to be more cognizant of his innings than the average rookie. Between his time in the majors and minor last season, Urias fell just short of 130 innings, and so it’s unlikely the Dodgers will try to push him past 150 or 160 innings in 2017.

Of course, the Dodgers also have to factor in the possibility of Urias still having some innings left to use in the postseason. Los Angeles has won four straight NL West titles, and so the Dodgers certainly expect to be in the playoffs again in 2017. If his innings become an issue late in the season, Urias could be moved to the bullpen, but if he pitches the way he did the second half of last season, the Dodgers would be doing themselves a disservice if they didn’t have Urias in their rotation. This gives the Dodgers a tight line to walk with regard to holding Urias back this season in order to conserve his innings.

If there’s a silver lining, it’s the fact that the Dodgers appear to have plenty of rotation depth after a slew of injuries forced them to use 15 different starting pitchers last year. Los Angeles returns the trio of Clayton Kershaw, Rich Hill, and Kenta Maeda to lead the rotation. The Dodgers also have Scott Kazmir, Brandon McCarthy, and Hyun-Jin Ryu, giving them enough options to fill out their rotation with or without Urias available.

The issue the Dodgers have is that most of their pitchers are coming off injury-plagued seasons, including dual aces Kershaw and Hill. If more injury problems arise this year, particularly to pitchers at the top of the rotation, it could force the Dodgers to abandon any plan to limit Urias’ workload out of necessity, much like last year.

On the surface, holding Urias back after spring training is far from ideal, but it may be able to serve an important purpose. Being able to add Urias to the rotation in the middle of the season could be a great asset for the Dodgers and a preferable option to having to shut him down late in the season. There’s no guarantee such a plan will work out as expected, but for the Dodgers, it appears to be an idea worth exploring.