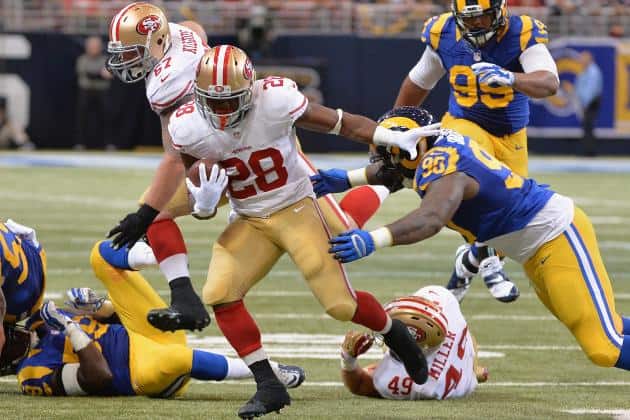 The second Monday Night Football game of the double-header that takes place every year in Week 1 pits the Los Angeles Rams against the San Francisco 49ers. While it’s still May, it’s never too early to get ready for the upcoming 2016 NFL season. Who has the best odds of coming away with a 1-0 record from this matchup? A preview and prediction are below.

These two NFC West teams had rather peculiar offseasons. Of course, the Rams may have had a bit more drastic of one, moving from St. Louis to Los Angeles. Then again, the 49ers brought in Chip Kelly, which is a franchise-altering move as well. Besides that, though, both the Rams and 49ers struggled mightily in 2015, and it’s curious as to why they weren’t more aggressive in free agency.

Surely, cap could have played an issue, but the Rams cut a number of players to start anew; yet, only signed a couple of notable guys.

Senseabaugh is an underrated replacement for Jenkins, and at a much lower rate of pay. Easley is still a young, mostly unproven player, and it’d be interesting to see if he could find a niche in the defensive tackle rotation alongside Aaron Donald.

The biggest news for the Rams, outside of moving to L.A., is undoubtedly trading the house for Jared Goff. One has to wonder, was it worth it?

That question cannot be answered right now, but this is not at all like trading up for a quarterback like Andrew Luck. Goff has his concerns, and he’s going to be thrown out there from Day 1 simply because the Rams don’t have anyone else. He’s the franchise guy, and while he seems to be the most pro-ready of the top three quarterbacks in this draft, he may also have the lowest ceiling. Paxton Lynch and Carson Wentz aren’t without their issues as well, but most of it is just system and experience questions, as both appear to have more talent and physical ability than Goff.

Optimistically, if the Rams continue to have the focus put upon Todd Gurley in the backfield, and let Goff come into his own in a simplified offense during his first year, then perhaps it’ll have some success. Outside of Gurley, though, the Cal product won’t have much help.

San Francisco also has quarterback troubles. Kelly is going to run his fast-paced offense again, and while the ideal fit might be Colin Kaepernick (if Kelly can build up his confidence once again), Blaine Gabbert or even Driskel could be in the mix; seriously, I wouldn’t be shocked if Kelly opened the competition up even to a sixth-round pick.

But the Niners didn’t do much else. In free agency, they added a decent veteran guard, and that’s about it.

In the draft, the 49ers did do pretty well. Buckner is going to be a game-changer on defense, which is something they desperately need. He’ll be a force on that defensive line, which they desperately missed with Justin Smith retiring before last season. When they traded up into the late-first round, I think most people were surprised when they took Barnett. Sure, another good, young guard will help, but they’ve got some major issues elsewhere that could have been addressed.

Prediction: Both of these teams struggled in 2015, and I think the story will be much of the same in 2016. The good news for both fanbases is that they don’t need to have too high of expectations. They should try to enjoy the growth of the young guys on their team. As far as Week 1 is concerned, expect the quarterback matchup to be Goff vs. Kaep. Goff will struggle early on this season, as he tries to gain chemistry with what weapons the Rams do have, and they’re going to need to rely on the defense and Gurley early and often. If the Rams play it smart and stick to that strategy, they should be able to start 1-0, but expect a low-scoring game — take the under.