A couple of weeks ago, the Los Angeles Rams were the laughing stock of the NFL. Their “tough” defense was decimated by the lowly San Francisco 49ers and made Blaine Gabbert look like a legitimate starting quarterback. The offense made people wonder why Case Keenum was still in the league and why Jeff Fisher was supposedly getting an extension.

But then the Rams had to go and prove you can’t make season long judgments based off of one game. 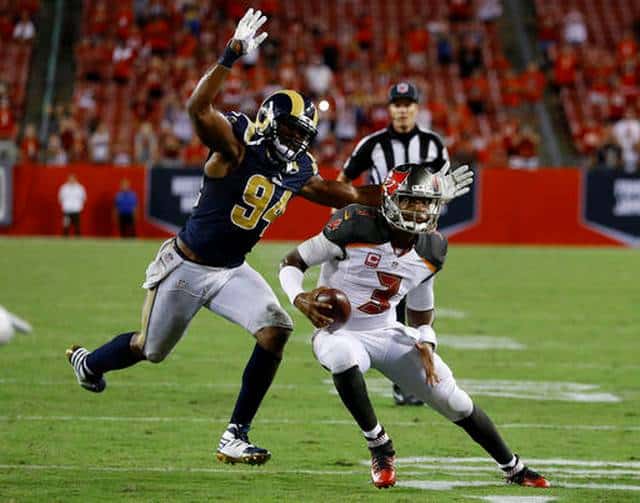 The offense was still horrible against Seattle, but the defense led the way to a 9-3 win over the Seattle Seahawks. But then the craziest thing happened in Week Three against the Tampa Bay Buccaneers—the offense woke up.

Case Keenum had his best day of the season so far going 14-26 for 190 yards, two touchdowns, and an interception. Todd Gurley finally looked like the beast fans came to love last season with 85 yards and a pair of touchdowns on 27 carries.

The defense helped out by giving the offense a short field on one drive after an interception that ended with a touchdown. Defensive lineman Ethan Westbrooks chipped in a 77-yard fumble return for a touchdown that gave the Rams a 31-20 lead in the fourth quarter.

After a lengthy rain delay, the defense had to hold off a final drive by the Buccaneers to preserve the win. With the win, the Rams improved to 2-1 on the season and moved into first place in the division (due to the tiebreaker with Seattle).

Crazy, right? As it turns out—it’s historic, too.

According to an article posted to NFL.com, there have been only three teams that have failed to score a touchdown in their first two games that managed to be 2-1 after three games–the 2016 Rams, the 1988 Browns, and the 1974 Eagles.

While it is nice to be above .500 after three weeks, it means nothing in the end and meant nothing to the ’88 Browns and ’74 Eagles. The Browns finished the season 10-6 and made the playoffs, but lost in the Wild Card game and saw head coach Marty Schottenheimer lose his job. The ’74 Eagles finished 7-7 and out of the playoffs.

So technically, you could say that their 2-1 start is dangerously close to some of that 8-8 “stuff” that Jeff Fisher hates so much. After the game, he did his best to keep things in perspective while talking to the media:

“All I know is we got Arizona at Arizona next week,” Fisher said via the L.A. Times. “None of them are easy, but we’ll take it.”

Of course, staying on top of the division is going to be pretty hard to do with how the Rams have been playing. While they did win Sunday, the defense gave up almost 500 yards of offense to the Buccaneers. Todd Gurley has to be productive week in and week out and Case Keenum is going to have to get on the same page with his receivers.

Next week they take a trip to Arizona to face a struggling Cardinals team that would love to get on track by defeating a division foe. Should they lose and Seattle beats the Jets in New York they will fall back to second in the division—otherwise known as the first loser.