"Mr. Price has been given the "Billy Walters treatment" by the betting establishments in the Las Vegas area, due to his distinct ability to pick winners and cost casinos millions."
Home
Football
Los Angeles Rams Head Coach Jeff Fisher Teaches Young Receiver A Very Important Lesson

One of the hardest things for a head coach of any sports team to do no matter what the level of the game they are at, is to get his or her players in line. To be effective as the leader of the team and the one ultimately responsible for how it performs, he needs to know that they are going to do what he says, when he says it, and whether he is watching or not.

Every coach will try to establish this in his own way, and many do adhere to the same logic as Los Angeles Rams head coach Jeff Fisher—that it is my way (in all things) or the highway. 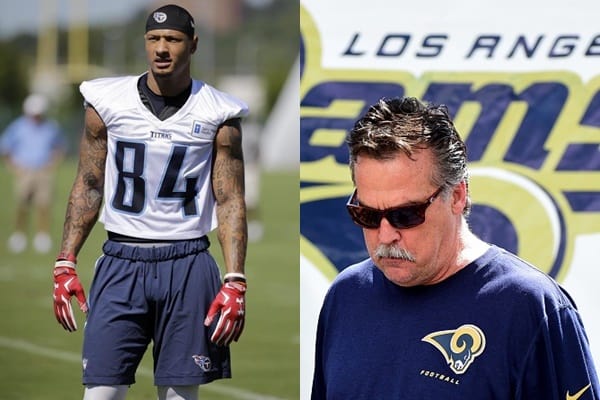 Having that philosophy is one thing, but how you express it to the players is another. On the first episode of the HBO series Hard Knocks, Fisher made it abundantly clear what his philosophy is by cutting a player over something that had nothing to do with football.

What did he do?

Well—his name is Deon Long. As a wide receiver out of Maryland, he was not drafted coming out of college last year but was signed by the Tennessee Titans. Along with the Titans, he spent time on the practice squad of the Miami Dolphins before ending the season on the Rams practice squad.

He was an okay receiver in college and not overly productive, but teams found a reason to keep him around for a little while. It appears that the reason the Rams kept him around for as long as they may have nothing to do with football, but more the Hard Knocks cameras.

Apparently, Fisher told the players that the team has two big rules and that they should not be broken—ever. The first makes sense; he wants you to be on time. The second makes sense as well, but there is room for interpretation (ESPN).

What is it? No visitors in your dorm room.

More than likely, what this rule is in place for is to keep guys from sneaking girls into their rooms to have sex with during training camp. So when the media reports began to flood the internet that Long was cut from the Rams in the opening episode of Hard Knocks for having a woman in his room, the insinuation is clear. The reality, however, is different.

“She wasn’t staying, she was stopping by to drop something off,” says Long. According to several sports talk radio shows, she was bringing by socks.

Fisher didn’t seem to care. It was more important that the team (or the Hard Knocks audience) understands you follow the rules to the letter.

“We have club rules, and I have to abide by them,” said Fisher (DailyNews). “So I am going to … (pause) … release you. Sorry. Not the first time I’ve done this for this particular violation, but I thought I made myself pretty clear.”

So—what was the lesson Fisher taught Long? Did it have anything to do with running routes, catching a ball, how to act like a professional, or the importance of being on time?

You can’t ever pack too many pairs of clean socks (Long is now in camp with the Philadelphia Eagles).