The season was looking up for the Minnesota Vikings. In spite of a poor outing by Shaun Hill and Adrian Peterson in Week One, the team walked away with a win. In Week Two, they handed the team over to Sam Bradford who proved to be worth trading for, but then Adrian Peterson went down with a knee injury.

We now know that Peterson is likely going to be out for the season due to a torn meniscus. Known as “the bucket handle tear,” recovery typically takes three to four months; he is having surgery on Thursday. Even though the information is all over the internet already, Vikings head coach Mike Zimmer is doing his best to be noncommittal about his running back’s availability:

“Everything is possible,” Zimmer said. “Could be season-ending. Could be three weeks, four weeks. Who knows?” 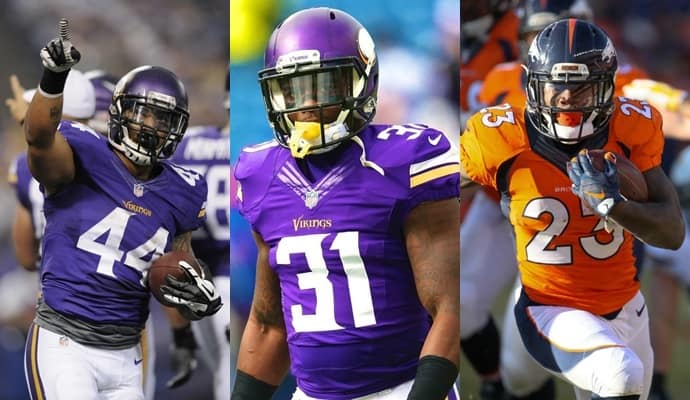 Peterson has been known to recover quickly in the past, but at his age, the team would be smart to give him as much time as they can. [UPDATE: The LCL in that knee has also been torn so he will be out for the season.]

Nothing will make him ready for the Carolina Panthers Sunday so the team will be going with Jerick McKinnon at running back (Matt Asiata will likely see time as well). McKinnon got a handful of starts (6) as a rookie (while Peterson was suspended) and has averaged a respectable 4.9 yards a carry over the course of his career.

The Vikings recently acquired former Denver running back Ronnie Hillman. Between him, McKinnon, and Asiata, Minnesota could still have a decent running game.

They shouldn’t count on one appearing Sunday against the Panthers, though. While the Panthers run defense is ranked 17th in the league, the low rank is because of the Broncos succeeded in running for 148 yards against them in the season opener. Last season they only allowed 88 yards a game and were ranked 4th in the league. Minnesota would be more likely to finish with a day like San Francisco had (65 yards) if they are lucky.

If the Vikings are going to win, it will be because the defense will do something few teams have done—stop Cam Newton. That, and Sam Bradford is going to have to do something else that few have done—pick apart the Carolina defense.

The best way to stop Cam Newton is to force him to stay in the pocket. His ability to run can cause all sorts of problems for defenses. Does the secondary come up and play the run and risk allowing someone to become open? Or do they stick to their man and hope the linebackers that are about the same size as Newton can keep him contained?

Forcing Newton to throw isn’t necessarily a good thing either. He may have only completed 59.5 percent of his passes over the course of his career, but with the help of Greg Olsen, Kelvin Benjamin, and Ted Ginn Jr, the Panthers tend to make the most of what they do complete.

However, if Minnesota can do a good job of limiting how many yards Olsen and Benjamin can gain after the catch, they can limit the damage Carolina can do in the passing game. So far this season, Benjamin has gained almost a quarter of his yards after the catch (44 of 199 yards). Olsen has gained over 40 percent of his total after the catch (85 of 195 yards).

Of course, the best way to limit a good offense is by playing even better offense yourself. Minnesota will struggle to do so in the running game making the passing game their best chance. However, the Panthers defense, despite the inexperience in the secondary, has only allowed about 200 yards passing a game. So exploiting them will be easier said than done.

So their chances of winning Sunday are going to be slim, but if they are going to keep from losing most of their remaining games, they will need to develop a running game they can count on. Otherwise, defenses are going to go after Sam Bradford so hard that he will eventually get hurt and then the Vikings will really be in trouble.