"Mr. Price has been given the "Billy Walters treatment" by the betting establishments in the Las Vegas area, due to his distinct ability to pick winners and cost casinos millions."
Home
Football
Madden NFL Has A Little Fun With Dez Bryant Over His Madden 17 Rating

Wide receivers have been known to be a little temperamental. They tend to be easily disrespected and can take offense to just about anything. When described by people, it is not unusual for receivers to be called “prima-donnas.”

New York Giants wide receiver Odell Beckham Jr. certainly let his prima-donna flag fly when he complained about being voted No. 10 on the NFL Network’s Top 100. Now we have Dallas Cowboys wide receiver Dez Bryant getting bent out of shape because of his Madden NFL rating. 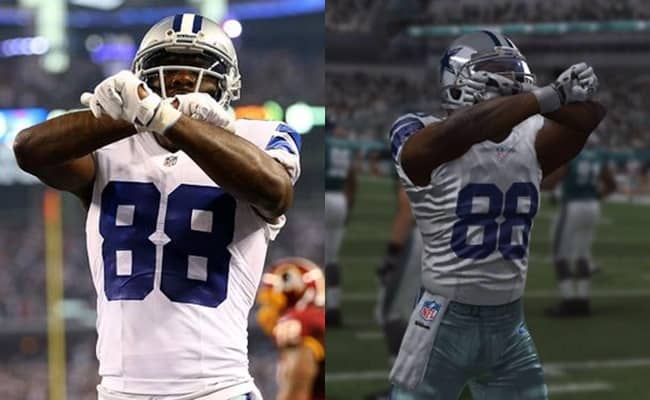 His rating on the game is not bad—90—but there are eight guys with a higher rating than him (Antonio Brown, Julio Jones, A.J. Green, Odell Beckham Jr., DeAndre Hopkins, Larry Fitzgerald and Alshon Jeffery). It doesn’t help that his rating is lower than it was in last year’s edition (96). But when you are coming off an injury filled season as he is, the expectations are going to be lower.

But don’t tell him that.

“I play Madden, I [expletive] love Madden,” Bryant said with a smile to the Dallas Morning News. “They would do me like that? Oh my God. That is an insult, like why would you do that to me? How much I love y’all. Like what? Not John Madden, because I love him. It’s the developers.”

Bryant went on to express how confident he is that he will prove the rating wrong once the season starts; that it is “going to shoot up real quick, you best believe that.”

As for his apparent anger over the rating—he was joking around, but some people didn’t seem to get it and thought he was actually angry. So Tuesday morning he made sure the Twitter universe knew he was just having some fun:

I gots to be a MEGA star..I laugh and joke about my madden rating and it gets a lot of attention lol .. Unbelievable be #blessed young man

The good folks over at EA Sports knew he was and decided to have a little fun at Bryant’s expense. Whoever runs the Madden NFL Twitter account posted a video clip Tuesday morning of Bryant’s game character attempting a field goal with the following message:

.@DezBryant your kick rating seems to be weighing down your OVR…  #Madden17

Even though the kick was lined up perfectly, he shanked it pretty bad.

Fans haven’t been able to see too much of Bryant yet, but when he has played, he has looked pretty good. In just a few series and only a couple of them with Tony Romo, he has four catches for 74 yards and a pair of touchdowns.

But if fans want to see more, it appears that they will have to wait for Week One. Bryant has been ruled out of Thursday night’s preseason game against the Seattle Seahawks due to a concussion suffered in practice Monday. He’ll likely sit the final preseason game as well (like every other starter in the league).