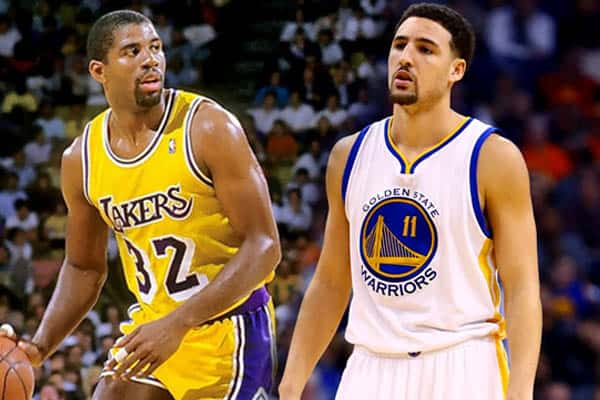 The Information Age has been great for sports fans. It has allowed us to become closer to our favorite players and teams than ever before. Fans now know more about their team than ever before. However, it often seems like the more fans know—or think they know–the more they want to find out.It doesn’t even matter if it is relevant to the game or a player’s performance. We want more from our favorite teams and players, and we want it now!

As a result, the media has become trained to do whatever it takes to keep the flow of information going regardless of its quality. If it means asking ridiculous, opinionated questions that are impossible to know the answer to, then so be it.

You know—questions like the one Klay Thompson answered for Draymond Green after Game Two of the NBA Finals Sunday night: Could the Warriors be compared to a team from another era?

Green gave an appropriate response to the question (and is 100 percent correct):

“I think it’s all subjective. To say we’re better than the ‘Showtime’ Lakers, how can you say that? We never played them.”

Thompson interrupted Green and had this to say: “We are better than the ‘Showtime’ Lakers.”

Some immediately took the comment as a young player calling out one of the greatest, legend-filled teams in NBA history. In reality, Thompson—whose dad was a member of two title teams with the ‘Showtime’ Lakers—was probably just messing with his dad.

With a few days off before Game Three, the media needed something else to talk about so for the last couple days this statement has received way too much attention. It didn’t help when Klay’s dad, Mychal Thompson, backed his son’s claim up:

“I admit this: We would shoot. And we shot eight 3s a game. They make eight 3s a quarter,” Mychal Thompson said Monday on the Thompson and Trudell Show on ESPN LA 710. “Golden State would outscore us 50-15 on 3s. So how are we supposed to win? So I agree with Klay, I think they would beat us. We couldn’t keep up with them offensively because of the way they can score so quickly.”

This comment appeared to upset another ‘Showtime’ great, Magic Johnson, who tweeted his thoughts on the matter (he disagreed with the Thompson’s).  Magic even called into ESPN’s First Take to express his displeasure and offer up his opinion:

“We’ve never seen two guys who can shoot like Steph and Klay, and I give them that,” Johnson said Tuesday on First Take. “But they’ve never ran up against somebody like us….”

Another Laker, Byron Scott, appeared on another program to offer up his opinion:

“No doubt in my mind, we would have beat them,” Scott said Tuesday on The Jump. “Magic’s right, there are so many things you can look at when you talk about this matchup.”

When it comes down to it, discussions such as these are as pointless as a fat guy on a diet going out to eat at Golden Corral. Even if he sticks to the healthy stuff, he is going to eat too much because that is what you do at a buffet.

It’s not an argument that can be won be either side because neither can prove they are right. The only reason it is done in the first place is for page views and to fill air time.

So let’s quit encouraging the media to ask these types of ridiculous questions and just remember the ‘Showtime’ Lakers as the incredibly awesome team that they were while we enjoy watching the Golden State Warriors create their own legend.