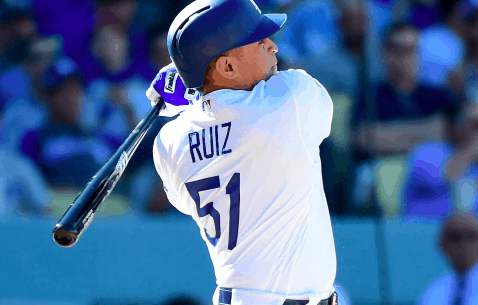 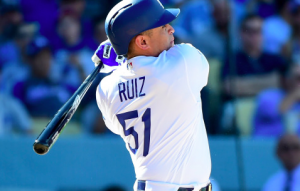 The Los Angeles Dodgers have traded veteran catcher Carlos Ruiz to the Seattle Mariners for left-handed pitcher Vidal Nuno. Neither team has confirmed the trade, but several outlets have reported the trade is a done deal. The Dodgers were not expected to pick up a $4.5 million option to bring back Ruiz in 2017, but the Mariners will undoubtedly exercise that option once the trade is made official.

For Ruiz, it will be the second time he’s been traded in a matter of months after spending the first 10 and a half years of his big league career with the Philadelphia Phillies. The Dodgers acquired Ruiz from the Phillies in late August to help fortify their catching situation for the stretch run and postseason. Ruiz was 3 for 11 with a home run and four RBIs in the playoffs, helping the Dodgers reach the NLCS.

However, Ruiz was not in the long-term plans for the Dodgers. Los Angeles will likely make Austin Barnes their backup catcher in 2017, as he is a younger and cheaper option than Ruiz, who will be 38 on opening day next season.

Meanwhile, the Mariners are more than happy to pick up Ruiz, who will provide veteran depth behind Mike Zunino and may actually have a chance to earn consistent playing time in Seattle. While his playing time was diminished in 2016, Ruiz still hit .264 with a solid OPS of .713.

Zunino, meanwhile, showed off plenty of power this season by hitting 12 home runs in just 55 games, but he was lacking in average, hitting just .207. Despite hitting 50 home runs over the course of four big league seasons, Zunion is a career .195 hitter, and so Ruiz gives them a different option offensively, as well as a reliable backstop with a wealth of experience managing pitching staffs.

The Mariners declined to pick up the option on backup catcher Chris Ianetta last week, opening the door for them to acquire Ruiz. While $4.5 million seems like a hefty salary for an aging catcher who figures to be a backup, Ruiz is a better option for that role than most of the catchers on the free agent market this winter, and so the risk may prove worthwhile, especially if Ruiz ends up pushing Zunino for playing time.

It’s important to remember that Seattle finished just three games out of the second wild spot in the American League in 2016. It’d be foolish to think that Ruiz is worth three extra wins over the course of a season, but his impact in a clubhouse and on a pitching staff can’t be overlooked. With the Mariners on the cusp of a postseason spot in 2016, any bit of improvement could end up making a difference in 2017.

In Nuno, the Dodgers are getting a lefty who should fit into their bullpen but does have experience as a starter. After being a 48th round pick in 2009, Nuno has bounced around the baseball world, but over the past couple of years he has proven to be a solid reliever capable of getting outs against both lefties and righties.

Since the Dodgers had no intention of retaining Ruiz next season, this trade could end up being a win for both teams. Los Angeles saves a little money after getting a couple of solid months out of Ruiz. Meanwhile, the Mariners fill a need by acquiring a backup catcher who could end up having a positive influence on Seattle’s 2017 season in more ways than one.