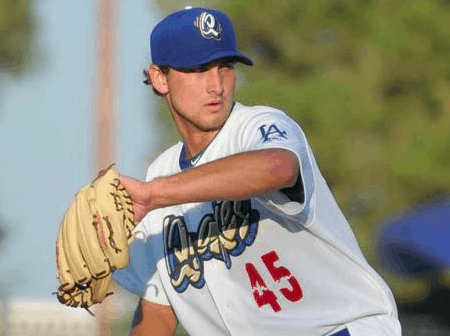 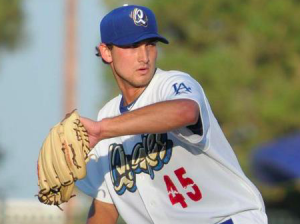 Surprise, surprise, the Seattle Mariners made a trade Wednesday night, their 14th of the offseason. The Mariners have acquired pitching prospect Chase De Jong from the Los Angeles Dodgers in exchange for minor leaguers Drew Jackson and Aneurys Zabala. The trade is meant to boost Seattle’s starting pitching depth both this year and in the future.

This is the second time in his minor league career that De Jong has been traded. The Toronto Blue Jays originally drafted him in the second round of the 2012 draft, only to trade him to the Dodgers in 2015. The now 23-year old De Jong is coming off the best season of his career. In 25 starts at double-A last season, the righty was 14-5 with a 2.86 ERA, results that suggest De Jong may be ready to make his major league debut at some point in 2017.

Scouts grade De Jong as having mostly average stuff, with his cutter being his only above-average offering. However, with good control of his pitches, considerable pitch-ability, and some deception in his delivery, De Jong’s productivity has exceeded his pure stuff. He profiles as a back-end starter and could be ready to contribute to Seattle’s rotation later this year.

“Chase is a very polished young pitcher coming off a very solid season at Double-A,” Mariners GM Jerry Dipoto says of his latest acquisition. “We see him as a guy knocking at the door as a Major League starting pitcher.”

Thanks to a couple of the other trades Dipoto has made this winter, the Mariners have what appears to be a rock-solid five-man rotation. The Mariners also have a few pitchers lined up as depth behind those five starters, including Ariel Miranda, Chris Heston, and Rob Whalen. Nevertheless, the addition of De Jong further bolsters that pitching depth, making the Mariners better prepared to deal with injuries to their rotation.

The Dodgers, meanwhile, have quite a bit of rotation depth already, in part because of the rash of injuries they suffered last season. With plenty of rotation options, De Jong was somewhat expendable for Los Angeles both in the short term and long term.

The Dodgers also acquire a pair of prospects in Jackson and Zabala who were among Seattle’s top 30 prospects, according to MLB.com. Jackson, a shortstop, was Seattle’s no. 12 ranked prospect heading into the season. He was a 5th round pick in 2015 who has moved quickly through the minors and should start the 2017 season playing at double-A.

Zabala is more of a project, although he was Seattle’s no. 22 prospect heading into the season, despite never pitching above rookie ball. He posted a 2.88 ERA in the Gulf Coast League last year while pitching out of the bullpen. He’s a long way from the majors but offers great promise.

Neither team is guaranteed to come out a winner in this trade, although the deal does offer possibilities for both sides. De Jong certainly appears to have big league potential, and the Mariners may end up needing him as soon as this year. The Dodgers, on the other hand, take a chance on a couple prospects who both have the potential to be big league contributors. Unfortunately, it may be a few years until we know what side benefited more from this trade.