Mariners To Reconsider Trading for Zack Cozart This Offseason 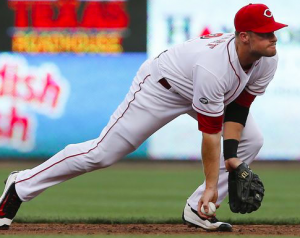 In the hours leading up to the non-waiver trade deadline on August 1, the Seattle Mariners nearly pulled off a trade for Cincinnati Reds shortstop Zack Cozart. In the end, the deal didn’t get done, as the Reds were distracted competing a rather complicated trading involving Jay Bruce and the New York Mets. But according to The News Tribune, there is a strong possibility that the Mariners will once again inquire about trading for Cozart this offseason.

Even without Cozart, the Mariners managed to make a late-season playoff push, finishing three games out of the second wild card spot, although they did play meaningful games during the final weekend of the regular season. It’s possible that things could have gone differently the final two months of the season with Cozart in the fold, as he would have been an obvious asset for the Mariners down the stretch. With the core of Seattle’s lineup remaining in tact for next season, including Robinson Cano, Nelson Cruz, and Kyle Seager, adding Cozart would be a significant offseason move that could help the Mariners make some noise in 2017.

The Mariners used Ketel Marte as their shortstop in 2016. The 22-year old may very well end up being Seattle’s shortstop of the future. However, Cozart would undoubtedly be an upgrade over him in the short term. Marte showed flashes last season, but overall his numbers were disappointing for a team that has playoff aspirations. He also had multiple stints on the DL, which may have held back his development.

Cozart has one year left before free agency, and it would make sense in a lot of ways for the Mariners to make him their every day shortstop before turning the job back over to Marte the following year. It would make the Mariners considerably better in 2017, while giving Marte a year to learn from a more experienced shortstop, or spend time in the minors refining his skills. The Mariners tried a similar approach this season with catcher Mike Zunino, who is now better prepared to be the team’s full-time catcher next season.

From Cincinnati’s perspective, Cozart is one of several players who could be traded this offseason, as the team continues to rebuild. Cozart and Brandon Phillips could both be traded this winter to make room for Jose Peraza, who ended the season as the team’s shortstop, and Dilson Herrera, who was acquired from the Mets in the trade for Bruce. Thus, it would not be a surprise to see Cozart made available, in which case the Mariners are a possible destination.

The proposed trade for Cozart earlier this summer would have involved pitching prospect Luiz Gohara and one other prospect going to the Reds. If Cozart does become available, it’s likely that teams besides the Mariners would be interested in the shortstop, but Seattle’s chances to land him would be improved if the teams were indeed close to having a deal in place earlier in the summer. This makes a Cozart trade to Seattle something to look out for during the offseason, and something that would make sense for both teams.