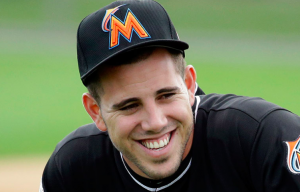 Less than 48 hours after the tragic and sudden death of star pitcher Jose Fernandez, the Miami Marlins returned to the field to play the New York Mets in what was an emotional game for both teams. The Marlins honored Fernandez by all wearing a jersey with Fernandez’s name and no. 16 on the back. The team also announced before the game that it would be the last time a Miami player ever wore the no. 16.

Following a video tribute to Fernandez, a hauntingly beautiful version of “Take Me Out To The Ballgame” by a lone trumpet, and moment of silence before the game, Mets players joined Miami’s players on the field, exchanging hugs in a show of support. It was a spontaneous and touching gesture so rarely seen before a baseball game, but it may have been exactly what the Marlins players needed to get through their first game following the passing of Fernandez.

Leading off the game for the Marlins was Dee Gordon. A picture of Gordon standing by an empty mound on Sunday at Marlins park, buried in grief, has become one of the most haunting and profound images that sum up the impact Fernandez’s death has had on the team and the baseball world.

Gordon, a left-handed hitter, took the first pitch of the game from Mets starter Bartolo Colon while standing on the right side of the plate, doing his best to mimic Fernandez’s batting stance, an homage to his fallen teammate. After taking the pitch for a ball, Gordon moved back to the left side of the plate, and two pitches later hit a towering home run to the upper deck. It was his first home run of the season.

Gordon grew increasingly emotional as he rounded the bases, and by the time he rounded third base and headed for home plate there were tears rolling down his face. “It seemed like it took forever,” Gordon said of rounding the bases. “I was just trying to go back to my teammates as fast as possible, and I couldn’t get there. I was just wondering why (Jose Fernandez) wasn’t on the top of the steps cheering for me.”

Mets catcher Travis d’Arnaud admitted after the game that he was in tears watching Gordon round the bases from just behind home plate. “I saw him crying right when he rounded first base,” d’Arnaud said about Gordon. “I was crying, too. I had my head down. But when he was coming to home plate, and tears were coming down his face, they were coming down mine, too. I’m pretty sure the whole world felt that emotion in that moment.”

As Gordon returned to the dugout to greet his teammates after the home run, longtime Mets broadcaster Gary Cohen may have captured the moment perfectly, saying on air: “I don’t care who you are, who you root for, or how badly you want the Mets to be in the postseason. That was phenomenal.” The Mets, of course, are in the thick of a three-team race for two wild card spots.

“Most definitely the most difficult game I ever played in,” an emotional Gordon said afterwards. “I just kept looking over and for (Fernandez’s) name. How does he not show up here today? Every time I see his number, his name, I keep hearing his voice. Honestly, selfishly, I wanted him to say, ‘I got y’all.’ I keep waiting on that moment.”

“I’m just proud of our guys, just the way they hung together,” Marlins manager Don Mattingly said. “It was not scripted. No one tells you how to handle it. There’s nothing that tells you how to handle it. They just stuck together and went out and played. I think they really wanted to honor Jose the way he played and how he went about things — just that joy that he had when he played, that confidence and that energy. I really think that was the focus of these guys, honoring him.”

Monday’s game was no doubt a cathartic experience for the Marlins, and a small but important step in the grieving process following the death of Fernandez, which remains incomprehensible and difficult to accept for the entire baseball world.