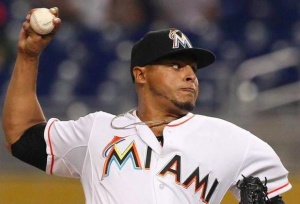 There’s no good time to send your closer to the DL, but to do so when trying to hold onto a slim lead for the second wild card spot is particularly bad timing. Such is the case with the Miami Marlins, who placed closer A.J. Ramos on the 15-day DL Tuesday night with a broken middle finger on his pitching hand. The move is retroactive to last Saturday and came one day after the Marlins lost a 14-inning game to the San Francisco Giants, a game in which starting pitcher Andrew Cashner had to pitch after everyone available in the bullpen had been used.

“It got kind of funny at the end because one day it would feel OK and then the next day it wouldn’t, and then it wasn’t two day in a row,” Marlins manager Don Mattingly said Tuesday, explaining the injury to Ramos. “We were trying to hold off and give him three days here this series and the off day, and hopefully (Friday) we would be ready to go, but with last night we decided we had to do this and bite the bullet.”

Ramos originally suffered the injury on July 25 while fielding a bunt, and there’s been a slight dip in his performance since then. He says the length of his middle finger has been a big reason for his success in recent years. “Obviously, with my finger being so much longer than the other one, I’m able to spin it a little bit different,” Ramos explains. “That being the main finger, it’s just one of those deals where it’s hard to pitch normally. Without being able to use that [long middle finger] as much as I normally do is kind of tough to be as sharp as I normally am.”

The Miami closer says the injury was at its most painful during his most recent outing last Friday. He’s hopeful that after a couple of weeks of not throwing, the fracture will be able to heal, as Ramos is hopeful he won’t have to miss an extended period of time.

In the meantime, the Marlins have an obvious fill-in closer in Fernando Rodney, who saved 17 games in 17 chances with the San Diego Padres earlier this season before being traded to Miami. However, Rodney has posted a 5.40 ERA since being traded to the Marlins, and the absence of Ramos will change the pecking order in Miami’s bullpen. Even with the added depth of trading for Rodney and most of Miami’s middle relievers putting together solid campaigns, the Marlins have been reliant on Ramos to carry the bullpen for much of the season, leaving some question marks as to how they’ll fare without him.

At the moment, the Marlins hold a one game lead over the St. Louis Cardinals for the second wild card spot, with the New York Mets and Pittsburgh Pirates just 2.5 games out. Even if Ramos returns from the DL as soon as possible, if the Marlins lose a couple games because their regular closer is unavailable, it could have a meaningful impact on the final standings.