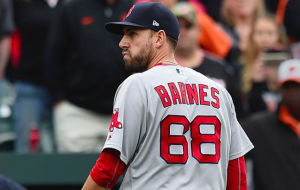 Major League Baseball has suspended Boston Red Sox reliever Matt Barnes four games after throwing behind the head of Baltimore Orioles third baseman Manny Machado on Sunday. Barnes has also been fined an undisclosed amount of money. Instead of beginning the suspension on Tuesday when the Red Sox open a series against the Yankees, Barnes has decided to appeal the suspension and will be eligible to pitch until his appeal is heard.

It’s believed that the pitch Barnes threw to Machado that whizzed behind his head and ended up hitting his bat for a foul ball was a form of payback for Machado’s slide on Boston second baseman Dustin Pedroia on Friday night. However, Barnes maintains that the pitch simply got away from him and that he didn’t intend to throw near Machado’s head, explaining that scouting reports told him to pitch inside against Baltimore’s star player.

“I would never intentionally throw at someone’s head. That’s kind of a line you don’t cross,” Barnes said after being ejected from Sunday’s game for the pitch to Machado. “I’m sorry that it kind of ended up that high and fortunately it didn’t hit him, but I think he’s got every right to be mad that that one got loose.”

When asked if he thought his pitch to Machado would get him suspended, Barnes replied, “No, not at all. It was a foul ball and we’ll see what the league says and go from there I guess.”

During Friday’s game, Machado’s spikes came up while he was sliding into second base, digging into the lower part of Pedroia’s leg. Pedroia hasn’t played since due to pain in his knee and ankle, although he has been examined by doctors and considered day-to-day, so the issue isn’t believed to be serious. Pedroia has maintained that he wasn’t upset about Machado’s slide and that getting hurt on that play is simply part of the game.

After the pitch from Barnes flew past Machado’s head on Sunday, he and Pedroia exchanged words with Machado believing that Pedroia ordered one of Boston’s pitchers to throw at him. However, Pedroia maintains that he did no such thing.

“I just told (Machado) I didn’t have anything to do with that,” Pedroia said Sunday. “That’s not how you do that, man. I’m sorry to him and his team. If you’re going to protect guys, you do it right away. He knows that. We both know that. It’s definitely a mishandled situation. There was zero intention of (Machado) trying to hurt me. He just made a bad slide. He did hurt me. It’s baseball, man. I’m not mad at him. I love Manny Machado. I love playing against him. I love watching him. If I slid into third base and got Manny’s knee, I know I’m going to get drilled. That’s baseball. I get drilled, and I go to first base. That’s it.”

It remains to be seen whether Barnes’ pitch squashes any bad feelings between the Red Sox and Orioles or ends up leading to further tension between the two teams. We won’t have to find out long, as the teams begin a four-game series in Boston next Monday. Of course, if Barnes’ appeal is heard by the league and upheld before that, he may not be eligible to play for part or all of that series.

The potential loss of Barnes for four games could also prove detrimental for the Red Sox. He leads the team in appearances this season, as he’s become a key part of Boston’s bullpen, posting a 3.60 ERA in 10 innings of work. Of course, after throwing a pitch that nearly hit Machado in the head, he should count himself lucky to only be suspended four games.