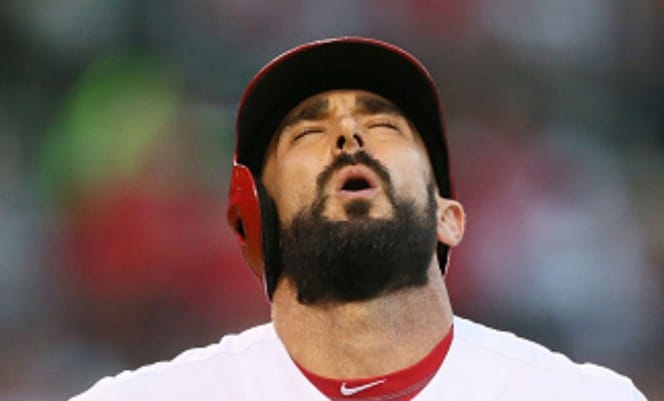 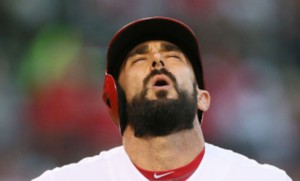 After being removed from Wednesday’s game with an oblique strain, the St. Louis Cardinals have placed infielder Matt Carpenter on the 15-day DL. Cardinals manager Mike Matheny expressed a “high level of concern” for Carpenter Wednesday night, and those fears appear to have been realized with the team placing Carpenter on the DL.

The injury will cost Carpenter the chance to play in Tuesday’s All-Star Game. He will be replaced on the National League roster by Cardinals shortstop Aledmys Diaz. Carpenter’s absence will also have a significant impact on the St. Louis lineup, as he was in the midst of the best season of his career, leading the Cardinals with a .988 OPS.

The Cardinals have not released a timeline for Carpenter’s return, but an oblique injury should keep him on the shelf for at least a few weeks, possibly longer if it doesn’t heal properly. He missed a month during the 2012 season with a similar injury. “I’ve had a few of those oblique injuries, and they’re not fun,” said Cardinals second baseman turned outfielder Kolten Wong. “We hope that’s not the severity that Carp is in. You just hope and pray that everything turns out all right.”

Wong is one option to fill in for Carpenter at second base, as the Cardinals will be forced to reshuffle their lineup in the wake several recent injuries. First baseman and outfielder Brandon Moss went on the DL with a sprained ankle earlier this week, as did backup catcher Brayan Pena, who is dealing with knee inflammation. Also, Jhonny Peralta did not play Wednesday because of pain in his left thumb. Peralta had surgery on that thumb in March that kept him out of the lineup until June, although the Cardinals are hopeful he will be back within the next day or two.

Wong has seen time in both center field and left field since returning from a brief demotion to the minors last month, and if he becomes the every day second baseman while Carpenter is out, it will affect the depth St. Louis has in the outfield. Wong’s move to second base will make Randal Grichuk the Cardinals primary center fielder. Grichuk, who is hitting just .215 this season, recently returned from a demotion to the minors when Moss went on the DL. With Wong at second base and Moss on the DL, St. Louis no longer has a left-handed complement to Matt Holiday in left field.

Clearly, the Cardinals are going to have some moving parts in the days and weeks to come, but Matheny is trying not to get discouraged by the recent rash of injuries. “We want every guy in there, but injuries happen, and when they do, we wish them well to get back as fast as they can,” Matheny said. “But if we sit there and over-analyze the fact that this guy plays this particular role for our club and somebody tells us it’s a shot we can’t recover from. It’s simply not true. Somebody’s got to step up.”

“Somebody’s got to step up” may be an understatement considering all that Carpenter has contributed offensively this season. The injury also comes at a bad time, as the seemingly immortal Chicago Cubs have lost six of their last seven, opening the door to the Cardinals and Pittsburgh Pirates to gain ground in the NL Central. However, the Cardinals have lost three in a row to Pittsburgh heading into Thursday’s series finale with the Pirates, unable to take advantage of Chicago’s recent slump. The injury to Carpenter will only make things that much harder for the Cardinals to make up ground, and may actually prove to be too much for St. Louis to overcome.