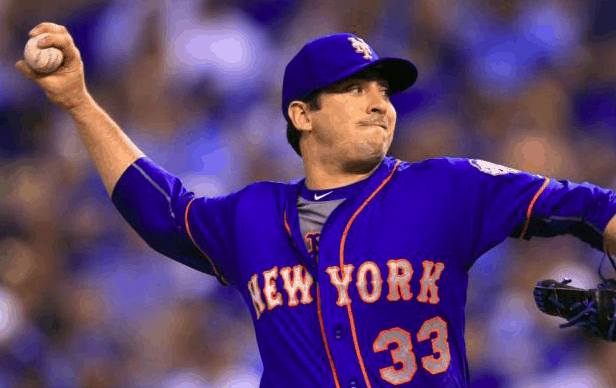 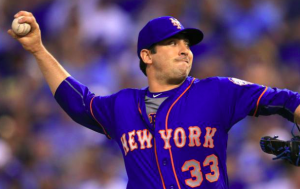 The New York Mets let out a collective sigh while watching Matt Harvey’s start in a spring training game Sunday against the Atlanta Braves, and then they may have just let out a little smirk. After a sluggish start to his spring, during which much has been made about his drop in velocity, Harvey looked a lot more like the old Matt Harvey on Sunday, as he showed off the velocity we’re used to seeing from him. Harvey consistently threw 94 mph or higher against the Braves, hitting 97 mph on the radar gun a few times.

“Very, very pleased,” Mets manager Terry Collins said about Harvey’s outing afterward. “He’s been feeling better each time out. The other day, he threw a good side and he’s been doing some exercises that are making him feel a lot better. I thought he was very impressive today.”

It wasn’t just that Harvey was throwing harder after struggling to sit in the low 90s for much of the spring, but he was also showing off a slider that was devastating against right-handed hitters and displayed good command of his pitches. It wasn’t a perfect outing, as Harvey let up two runs on five hits over six innings. But it was a huge improvement from his previous starts, helping him lower his spring ERA from 9.64 coming into the outing to 5.89.

“That was a big step — probably the biggest so far of spring, and moving forward into the season,” Harvey said. “Looking to what has kind of happened throughout spring, I think the excitement of each start getting better and better, not necessarily numbers wise, but the way my body felt, I felt like it was only a matter of time.”

Harvey’s lack of velocity early in the spring caused quite a stir on the heels of the righty undergoing surgery for thoracic outlet syndrome last summer. With little track record for pitchers having that surgery, there was no assurance Harvey would be the same pitcher he was in 2015 when he helped the Mets reach the World Series or the same pitcher he was in 2013 before he underwent Tommy John surgery.

With two major surgeries in less than four years, Harvey appears to have taken a more mature approach to working out and his routine in between starts in hopes of avoiding another serious injury. Despite some bumps along the road this spring, that work seems to be paying off at the right time.

“I am definitely a lot more patient with getting the work done before I start any type of activity,” Harvey explains. “In years past, when I was a little bit younger, you could kind of go out there and go, but I don’t want have any more surgeries. So spending an extra hour, waking up an extra early, is something I have been dedicated to doing and it is definitely paid off.”

The positive outing from Harvey couldn’t have come at a better time for the Mets. Earlier in the day, the team announced Steven Matz was being scratched from his next spring start on Monday amidst irritation in his elbow. The Mets don’t think the issue with Matz is serious, but it could prevent him from being part of the starting rotation when the season begins.

Starting the season with questions about both Matz and Harvey would have put quite a damper on New York’s high aspirations for the season, even if the club has good rotation depth beyond the quartet of young aces that includes Harvey, Matz, Noah Syndergaard, and Jacob deGrom. The news involving Matz was unfortunate for the Mets, but having Harvey perform the way he did a few hours later takes the sting out just a little, giving the team hope that Harvey is ready to return to being the ace he’s been in the past.