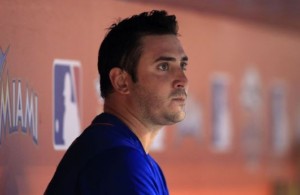 The New York Mets have suspended starting pitcher Matt Harvey three games without pay for a violation of team rules. Mets GM Sandy Alderson made the announcement Sunday morning, hours before Harvey was scheduled to start against the Miami Marlins. Alderson would not elaborate on what Harvey did to get himself suspended, only that Harvey had been sent home. The Mets have called up lefty journeyman Adam Wilk to start Sunday’s game against the Marlins in place of the suspended Harvey.

“You’ve got to take the entire club into perspective, it’s the big picture of things,” Collins said. “In order to sometimes control things you’ve got to make tough decisions and this is one of them.”

The suspension actually went into effect for Saturday’s game, prior to the announcement being made, and so the club knew before Sunday morning that Harvey wouldn’t be taking the mound. Collins says he may have managed his bullpen during Saturday’s game differently, knowing that Harvey wasn’t pitching Sunday. Wilk has a 5.93 ERA in six starts at triple-A this year. His last big league appearance was a two-inning outing with the Angels in 2015.

“To be honest there was some moves made last night because we felt this might occur, that we had to protect our pitching staff a little bit,” Collins told the media Sunday.

After speaking with the media Sunday morning, Collins held a team meeting, during which Harvey’s teammates learned of the suspension for the first time.

“Anytime you get a chance to not have somebody with you, it’s not the way you want it to be, regardless of what the reason is why the person isn’t with you,” said Curtis Granderson, who added that he has not spoken with Harvey since the suspension.

“I don’t know if I’d use the word frustrating,” Jay Bruce said of Harvey’s suspension. “Obviously there are team policies and when those aren’t followed, action has to be taken. I don’t know any of the details, I just know that Matt’s not here today, he’s going to miss a few days.”

Harvey’s suspension is the latest incident in what has already been a rollercoaster season for the 28-year old. There were questions about his velocity during spring training after undergoing surgery for thoracic outlet syndrome last summer. He started the season strong but over his last two starts, Harvey has allowed 12 runs in 9.2 innings of work. However, Harvey has maintained that he feels healthy and strong on the mound despite not getting the results he wants.

Harvey will presumalby be able to rejoin the team on Tuesday after serving his three-game suspension, but the team has not commented on when he will be back on the mound. It figures to be either Tuesday or Wednesday when the Mets play home against the Giants before heading out on the road.

In the short run, Harvey being suspended for three games may end up being a blip on the radar over the course of a 162-game season. However, the team leveling a suspension against him does not bode well for his relationship with the club and perhaps his teammates. If nothing else, Harvey’s suspension adds more drama and another distraction for the Mets, who have aready endured a complicated first month of the season.