Posted on October 1, 2016 by Bryan Zarpentine 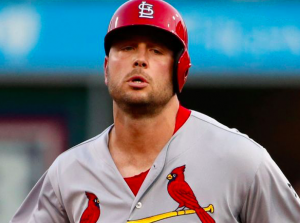 The St. Louis Cardinals activated outfielder Matt Holliday from the DL Friday afternoon after more than six weeks on the shelf with a broken thumb. Not long ago, it was becoming doubtful that Holliday would make it back onto the field this season. Nevertheless, the Cardinals activated him on Friday in hopes of getting him one more at bat in front of the home fans during the final weekend of the season amidst reports that the team would not be picking up his option for 2017, ending his tenure in St. Louis.

Friday evening, Holliday stepped to the plate in the 7th inning against the Pittsburgh Pirates as a pinch hitter, receiving a raucous ovation from the home fans. He took that energy from the fans and turned it into a home run over the right field wall on the third pitch he saw in what could possibly be his final at bat as a member of the Cardinals. It was the perfect ending to a seven-and-a-half year tenure in St. Louis.

After the home run, Holliday was immediately met by long-time teammates Matt Carpenter, Yadier Molina, and Adam Wainwright. “There’s something magical about that,” Wainwright said. “You can’t make that stuff up. That homer right there, everybody in the dugout was saying, ‘Man, it would be so cool if he hits a homer right here.’ And he did it on an 0-2 pitch.” After greeting the rest of his teammates, Holliday gave one last tip of his cap to the home fans.

“Still have chills,” said manager Mike Matheny after the game. “These guys understand what an important role he plays in this organization and what a great job he’s done for each of them individually. That’s how it should be. Then the fans took over from there and all the way through. I know it meant a great deal to him and probably more than what words can describe.”

St. Louis GM John Mozeliak generally doesn’t speak to players with options until after the season, but in Holliday’s case he made an exception in order to give him this opportunity. “To honor my relationship with Matt, I thought it was better to be candid with him rather than just say, ‘We’ll decide that when the offseason comes,'” Mozeliak said. “In his case, I feel he’s earned the type of respect and had the type of career here that he had that right (to know).”

Holliday was too emotional to meet with reporters before the game, but he did issue a statement to sum up his time in St. Louis. “I am proud of what we have accomplished on and off the field during the past seven years,” the statement read. “It has been an honor to play in front of such great fans and for such an historic organization. I can honestly say it has been a dream come true. While I’m disappointed this could be it here in St. Louis, I understand that it might be time to move on.”

The home run from Holliday helped secure a 7-0 win for the Cardinals, keeping them a game behind the San Francisco Giants for the second wild card spot in the National League. Despite the pinch-hit home run, it doesn’t appear that the Cardinals have plans to use him if their season extends beyond Sunday.

It’s unclear whether the 36-year old Holliday intends to play next season or if he will retire. If Friday night does turn out to be his final major league game, what a way to go out.