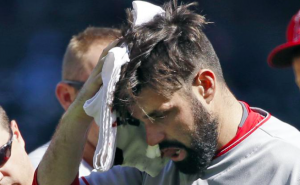 Los Angeles Angels starting pitcher Matt Shoemaker suffered a small fracture to his skull and a hematoma on Sunday when he was struck in the head by a line drive off the bat of Seattle Mariners third baseman Kyle Seager. It was a frightening moment for Shoemaker, as well as everyone in attendance. Shoemaker was helped from the field by trainers and stayed in a Seattle hospital overnight for observation under the care of neurologists.

The line drive off Seager’s bat in the 2nd inning was clocked at 105 mph. Trainers immediately rushed out to Shoemaker, who dropped to his knees after getting hit. He remained on the ground for several minutes, bleeding from his head, but eventually he was able to walk off the field with the assistance of trainers. “That was probably the scariest thing I’ve ever seen on a baseball field,” Seager said after the game.

“He was conscious the whole time,” Angels manager Mike Scioscia said. “Those guys did a great job just to assess and evaluate him. There was blood coming out of his nose. There were some things that they had to address. And that’s the scary part. Hopefully we can understand exactly what’s going on with him through the night. … Hopefully we’ll just keeping getting good news about his recovery.”

Throughout the rest of the game, Scioscia and the Angels players were given updates on Shoemaker’s status whenever they were available. Players also made their way to the clubhouse throughout the game to show Shoemaker their support.

“The fact that Matty was conscious and all his reactions were what they were supposed to be in the assessment, I think we could exhale a little bit,” Scioscia said. “Just to get him up and walking off the field let you feel a little bit better about what could have happened. And it’s tough. It’s tough.”

Seager was visibly shaken up while Shoemaker was on the ground being attended to. “Who cares about the game?” he said afterwards. “You’re just worried about him. You see him sitting there on the ground and all the trainers and doctors up there. You really don’t care too much about a stupid game at that point.”

The game eventually continued with the Angels winning 4-2 after the Los Angeles bullpen pitched the final 7.2 innings. But getting through the game was no easy task. “That was a tough situation,” Scioscia said. “Something like that, it affects everybody, and these guys all went out there and took the ball and did a great job to help us win a game, but I know your thoughts are elsewhere at that point until you get an understanding of exactly what’s happening with Matty.”

The Angels hope to have an update on the status of Shoemaker on Monday. We all wish him a speedy recovery.