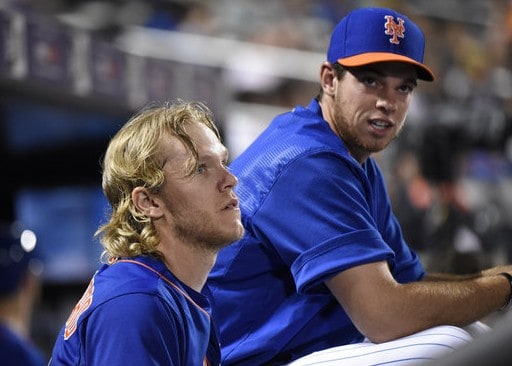 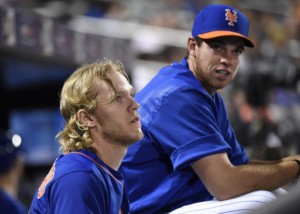 The New York Mets have been able to dodge some injury scares lately, but it’s possible that their luck may be running out. There are reports that both lefty Steven Matz and righty Noah Syndergaard are suffering from bone spurs in their pitching elbows. The Mets have confirmed that Matz has a bone spur in his left elbow that could cost him at least one start; however, Syndergaard has thus far denied reports that he also has a bone spur in his elbow.

Syndergaard has complained about elbow pain on multiple occasions this season, but the Mets have maintained that his elbow is structurally sound following a recent MRI. He says that he is taking anti-inflammatory medication to treat the soreness. However, Syndergaard lasted just three innings in his start Monday against the Washington Nationals, allowing five runs on seven hits. During those three innings, Syndergaard had his usual velocity, but struggled with his control, which could indicate something amiss with his elbow.

After the game, Syndergaard denied that he had a bone spur or that his elbow was causing trouble for him. “I do not,” he said when asked if he had a bone spur. “My arm feels great. It’s amazing what a little anti-inflammatories can do.” He went on to say that his arm “almost felt too good,” adding, “Right now my arm feels really good. I’ve just got to be ready to go in five days.”

Meanwhile, Matz underwent an MRI on Monday that revealed a bone spur in his elbow. He is scheduled to start Wednesday against the Nationals, but the Mets are unsure if he will make that start. The bone spur is said to be small but painful for Matz, and the team is reportedly considering surgery for him. Matz is said to be unsure about how he wants to handle the issue. His performance has suffered as of late, including his last outing when he got knocked out in the 5th inning after being handed an 8-0 lead. Like with Syndergaard, this could be coincidence or a sign that his elbow is bothering him.

Both Syndergaard and Matz will likely need surgery at some point, but the question is whether or not the two can pitch through any pain they’re experiencing for the rest of the season. Surgery at this point would likely keep either on the shelf until late in the season, and could potentially be season-ending surgery, so the Mets will be careful about how they handle their young arms.

Generally, pitching with a bone spur is possible as long as the player can tolerate the pain. With Syndergaard and Matz, the Mets will also have to consider how effective each can be pitching with the injury. If one or both does undergo surgery and miss a significant chunk of the season, it could spell trouble for New York’s 2016 season. How exactly the team will handle Syndergaard and Matz and their respective injuries, we will find out in the days and weeks to come.