Mets Lose Jacob deGrom for Rest of the Season 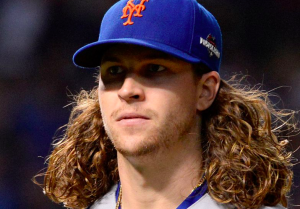 The New York Mets have experienced a most rapid and unfortunate turnaround regarding ace Jacob deGrom. Friday afternoon, the Mets announced that deGrom would return after being out for more than two weeks with a forearm strain to start Sunday’s game against the Minnesota Twins. However, on Saturday the team announced that deGrom is likely finished for the season and is facing offseason surgery to repair the ulnar nerve of his elbow.

Mets GM Sandy Alderson told the media that deGrom’s bullpen on Friday went well, setting him up to start on Sunday. However, later on deGrom experienced pain while shagging fly balls during batting practice, prompting the Mets to shut him down.

“Jacob has had issues with the ulnar nerve in his right elbow, which is not unusual after Tommy John surgery, even during the time after that surgery,” Alderson said Saturday. “He will not pitch tomorrow. I think it’s unlikely he will pitch the rest of the season. We’ll see.” Alderson added that the surgery is not a serious procedures that carries much risk. He also said it’s not unusual for pitchers who have undergone tommy John surgery to have this issue. DeGrom underwent Tommy John surgery in 2010, the same year he was drafted by the Mets.

“I’ve been through Tommy John before, and I definitely don’t want to go through that again, so I think this is good news compared to what it could’ve been,” deGrom said.

“I haven’t felt it all year. It might’ve been five or six starts ago,” deGrom explained. “I had a couple of good ones with it — when the fingers were going numb — and I was just like ‘alright, whatever.’ Then I had a couple of bad ones and I don’t think that’s the reason I had bad starts. I just think I just wasn’t able to throw the ball where I wanted to because I wasn’t feeling really any different than when I had the good ones. But now it’s kind of turned into a pain, and we want to get that taken care of.”

With deGrom likely done for the season, the Mets will continue to go with fill-ins Seth Lugo and Robert Gsellman, both of whom have pitched well and complemented Noah Syndergaard and Bartolo Colon, who are now leading New York’s rotation. Gabriel Ynoa will start Sunday in deGrom’s place. That spot was previously held by Rafael Montero, who struggled with his control in three starts pitching in deGrom’s place.

The Mets did get a bit of good news on Saturday, as injured starter Steven Matz threw a bullpen session and came out of it feeling fine. Matz hasn’t pitched since August 14, and his return is in no way imminent, but the Mets are hopeful he will be able to return before the end of the regular season. Getting Matz back would help to make up for the fact that deGrom is unlikely to return this season.

Heading into Sunday, the Mets are tied with the San Francisco Giants for the two wild card spots in the National League, with the St. Louis Cardinals two games behind each. Losing deGrom for the season will certainly make it more difficult for New York to secure one of the two wild card spots, in addition to hindering their postseason chances if the Mets are able to advance. Nevertheless, with quality performances from some of their replacement starters, the Mets remain in good shape to return to the postseason in 2016.