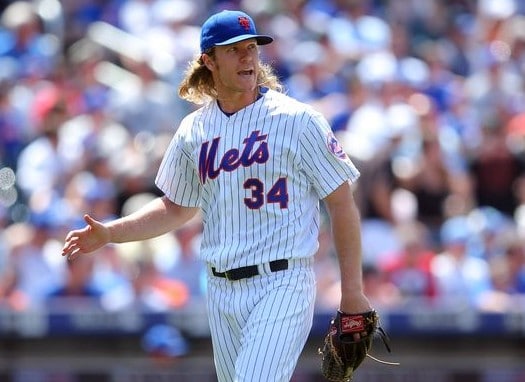 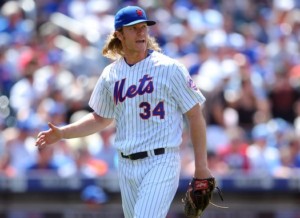 Less than one day after the New York Mets survived an injury scare with 43-year old pitcher Bartolo Colon, who is fine after taking a line drive off his thumb Tuesday night, the team and its fan base can breathe a huge sigh of relief. On Wednesday, ace Noah Syndergaard, outfielder, Yoenis Cespedes, and rehabbing pitcher Zack Wheeler were all dispatched for extra medical attention, creating almost unimaginable concern. However, all three received positive news from those medical visits, allowing the Mets and their fans to breathe easy.

Syndergaard started Wednesday afternoon’s win against the Kansas City Royals, but left after six innings, complaining of elbow discomfort. It was the second time this season Syndergaard complained of elbow pain, prompting the team to immediately send him to the hospital for further examination. Fortunately for the team, an MRI revealed no structural damage.

Syndergaard will begin taking anti-inflammatory medication and is free to return to his normal routine. However, the Mets have not said whether he will make his next scheduled start Monday against the Washington Nationals.

Cespedes also left Wednesday’s game in the sixth inning, complaining of wrist pain, and was also sent to the hospital for tests. He has been diagnosed with a mild sprain of his left wrist and given a cortisone shot for the pain. The shot will likely keep him out a couple of days, as the team begins a four-game series with the Atlanta Braves Thursday night, but Cespedes is expected to avoid a trip to the DL, a huge relief for a team that has struggled to score runs lately even with their best hitter in the lineup.

Finally, Wheeler returned to New York to be examined after complaining of elbow pain earlier this week. Wheeler missed all of 2015 after undergoing Tommy John surgery and was close to pitching in minor league rehab games when he experienced discomfort in his surgically-repaired elbow. Fortunately for Wheeler, the team says there is no structural damage in his elbow. He has received a cortisone shot to treat nerve irritation in his elbow. However, his rehab has obviously hit a small setback and he will have to wait a little longer before pitching in minor league rehab games.

Getting positive news for all three players is huge for the Mets. It remains to be seen how much Wheeler will be able to contribute to the team this season, but losing either Syndergaard or Cespedes for a significant period of time would have been disastrous. Syndergaard is the unquestioned ace of the Mets’ staff, and with Matt Harvey and Jacob deGrom not quite at the top of their game, Syndergaard is not someone New York can afford to lose. Cespedes is equally important to the Mets’ lineup, which is having all kinds of problems, especially with David Wright and Lucas Duda both out indefinitely.

When Syndergaard and Cespedes will return to the field remains an uncertainty at the moment. But the fact that neither has a serious injury and neither will have to be placed on the DL is a huge win for the Mets. Losing either would have created massive panic among the team’s fan base and made a return trip to the postseason in 2016 that much harder for the reigning National League champions.