Mets To Pick Up 2017 Option On Jose Reyes 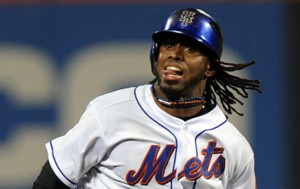 The New York Mets have some important and difficult decisions to make this offseason. Choices may need to be made with regard to players like Yoenis Cespedes, Neil Walker, Jay Bruce, and Lucas Duda. However, the Mets appear to have already made the choice to bring back infielder Jose Reyes in 2017. Jon Heyman is reporting that the Mets intend to pick up the option Reyes has for next season, making him part of the team’s plans in 2017.

The Mets signed Reyes over the summer after he served a suspension for a domestic abuse arrest last winter and after the Colorado Rockies cut ties with him. In addition to stipulating that Reyes must continue to undergo therapy and perform community service to atone for his inexcusable arrest, his contract with the Mets also included an option for 2017.

With Reyes performing well and becoming an important reason why the Mets made the postseason this year, it’s a no-brainer to bring back Reyes next year, especially since the Rockies will be paying a majority of his salary, leaving New York to cover only the major league minimum.

How exactly Reyes fits in with the Mets next season remains to be seen, but there are a number of roles he could play. The most obvious is the role he had in 2016, which is that of an insurance policy for his good friend and Mets captain David Wright at third base.

Wright is coming off neck surgery and still has a chronic back condition, and so his status figures to remain uncertain until the start of spring training. Even if Wright is fit to play, he won’t be playing every day, giving Reyes plenty of opportunities to fill in at third base, a position he handled well this season, considering he had no previous experience playing there.

Reyes is also capable of playing both shortstop and second base. Asdrubal Cabrera figures to be New York’s every day shortstop next season, although Reyes is a more than suitable backup. Reyes may have a chance to carve out a more permanent role at second base. If Walker doesn’t return to the Mets in 2017, Reyes, Wilmer Flores, T.J. Rivera, Gavin Cecchini, and Matt Reynolds could all be candidates to be the every day second baseman. Flores would appear to be the favorite in that group, but if the Mets have no other obvious candidates for the leadoff spot, there’s an argument to be made in favor of Reyes getting a bulk of the playing time at second base.

One outside-the-box idea could be to give Reyes exposure in the outfield. The composition of New York’s outfield will depend on what happens with Cespedes and Bruce, but Reyes certainly has enough speed and athleticism to attempt a position change to the outfield, which could help the Mets get him into their lineup in the leadoff spot.

The versatility that Reyes gives the Mets, not to mention how much the fan base likes him, makes picking up his option for next season a no-brainer. Reyes has said that he would like to retire with the Mets, and while that obviously can’t be guaranteed, the Mets are making the right move by bringing him back in 2017, when he could play an even bigger role than he did in 2016.