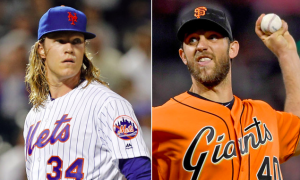 Coming down the stretch, three teams were locked in a tight race for the two wild card spots in the National League. Surviving the race were the New York Mets and San Francisco Giants, leaving the St. Louis Cardinals out of the playoffs for the first time since 2010. Now the Mets and Giants, who just so happen to be the last two National League champions, play Wednesday night in New York for the right to play the Chicago Cubs in the NLDS.

The Mets and Giants are two teams moving that took different paths to the wild card game. The Giants were sitting pretty at the all-star break, only to turn into one of the worst teams in baseball during the second half of the season. San Francisco managed to win five of its final six games in order to hold off the Cardinals and clinch a wild card spot. They now hope to put their second half struggles behind them and get hot in the postseason, as the Giants aim to win their third World Series in the last five years.

Meanwhile, the Mets were just about left for dead in the middle of August, as a slew of injuries appeared to be too much for the reigning National League champions to overcome. However, it was back-to-back wins against the Giants, salvaging a four-game series, that helped New York turn things around. Since that series in San Francisco, the Mets have won 25 of their last 38 games, moving from 5.5 games back for the second wild card spot, to the top of the wild card standings, giving New York a chance to defend its National League pennant from a year go.

The National League wild card game will feature a heavyweight matchup between Noah Syndergaard of the Mets and Madison Bumgarner of the Giants. Both pitchers are among the National League leaders in ERA, and together they create arguably the most anticipated pitching matchup in the brief history of the wild card playoff.

Syndergaard has been as steady and consistent as can be all season, and is capable of dominating a lineup on any given day. He faced the Giants twice this season, allowing four runs in 5.2 innings in a loss at Citi Field in early May, although in San Francisco in August, Syndergaard tossed eight scoreless innings, allowing just two hits. He will also be pitching with a full week of rest.

Bumgarner, meanwhile, has not been his usual dominant self late in the season. He gave up three runs or more in seven of his final nine starts of the season, including an outing against the Mets in which he gave up four runs in five innings of work. Bumgarner won that game, although the lineup he faced that day did not include Yoenis Cespedes, Curtis Granderson, or Asdrubal Cabrera, three players who have carried the Mets down the stretch.

The x-factor in this game could be on the base paths. Syndergaard has had trouble holding runners all season, while the Giants have a few base-stealing threats in Angel Pagan, Eduardo Nunez, and Denard Span who could create problems if they’re able to reach base, although Nunez is questionable to play due to injury. On the other side, the Mets have little team speed outside of third baseman Jose Reyes. Of course, Reyes is always a threat to run when he’s on base, and if he can help steal a run for the Mets that doesn’t come off a home run, it could be the difference in the game.

The Vegas odds in this game are almost even, although the Mets appear to be slight favorites by virtue of being the home team. With Syndergaard facing Bumgarner, this is essentially a toss up. However, the San Francisco bullpen has been a disaster for much of the season, so there will be great pressure on Bumgarner to go the distance, whereas Syndergaard just has to get the ball to Addison Reed and Jeurys Familia in the late innings. Bumgarner has done some magical things in the postseason, but the Mets will eventually get a crack at the bullpen and hit a couple home runs to win late. New York wins 5-3.