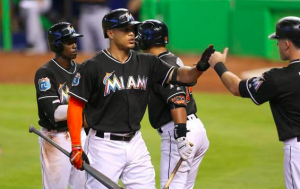 It was undoubtedly a long offseason for the Miami Marlins, as they continue to mourn the loss of ace Jose Fernandez. But with a new season upon us, they are forced to move on without their fallen star. Are the Marlins ready to take that next step forward in 2017 or will they continue to flounder in the middle of the pack?

Without Fernandez leading the way, it’ll be difficult for the Marlins to put together a formidable rotation this season. The hope is that Adam Conley can continue to emerge and announce himself as the team’s new ace in 2017. The Marlins have also acquired Edinson Volquez and Dan Strailly this offseason to add depth and a veteran presence, although Volquez is coming off a down year and Strailly was unproven before a breakout season with the Reds last year. That trio should be solid, but it doesn’t necessarily measure up to some of the other rotations in the NL East.

For Miami’s rotation to keep up in the division this year, the Marlins will need a big year out of Wei-Yin Chen, who struggled last season after signing a big contract with the Fish last winter. Unfortunately, much like Volquez, and to some extent Conley and Strailly, the Marlins don’t know what to expect out of Chen this season, so it’s tough to predict just how effective their rotation will be in 2017.

The Marlins made great efforts this winter to sign one of the high-profile closers on the market, but they couldn’t convince any of them to come to Miami. However, the Marlins still have A.J. Ramos, who was an all-star last year, in the closer’s role, so Miami should feel confident with a lead in the 9th inning.

To provide some support for Ramos, the Marlins were able to sign Brad Ziegler and Junichi Tazawa this offseason to give them a couple veteran setup men. Those two will join the likes of Kyle Barraclough, David Phelps, and Dustin McGowan, who are all coming off strong seasons in 2016.

It’s important to note that the Marlins are lacking a proven lefty in their bullpen after Mike Dunn signed with the Rockies. Nevertheless, Miami could end up having one of the deeper bullpens in baseball this year, despite being unable to land the high-profile closer the coveted.

Miami’s lineup remains largely the same as last season, which could be a good thing if the team can stay healthy. The Marlins were toward the bottom in the National League in several offensive categories in 2016, although Giancarlo Stanton missed time late in the year, Justin Bour missed a large chunk of the season, and Dee Gordon never got back on track after serving a suspension.

When Stanton is healthy, he, Marcell Ozuna, and Christian Yelich may be the most intimidating outfield in baseball. If Bour can bounce back after missing almost the entire second half of 2016 with an ankle injury, he gives the Marlins another big-time power threat in the middle of their order alongside Stanton. Catcher J.T. Realmuto and third baseman Martin Prado also give Miami a couple consistent hitters, although Prado will be sidelined at the start of the season.

The key for the Marlins will be Gordon becoming the catalyst at the top of the order he was in 2015. If he can get on base and use his speed with so much power in Miami’s lineup behind him, the Marlins could be quite potent offensively. The Marlins could also stand to get more from shortstop Adeiny Hechavarria, who struggled offensively for much of 2016.

The Marlins won 79 games last season, which was an eight-win improvement from the previous season. However, with the death of Fernandez still lingering and the loss of their ace on the field, it’s hard to envision the Marlins taking another positive step forward in 2017.

Look for the Marlins to finish 78-84 in 2017. A healthy lineup will be able to score plenty of runs, while Miami’s bullpen should be solid. However, what the Marlins will get from their rotation is up in the air. The Fish should be able to hold off the Braves for third place in the NL East, but even if everything goes perfectly, they don’t have the kind of rotation that can keep up with the Mets and Nationals at the top of the division.