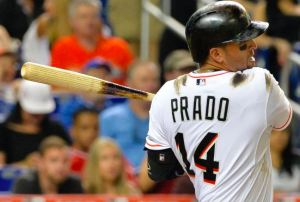 The Miami Marlins have a strong core of young players they hope to build around in the years to come, but on Wednesday they secured the future of two of the team’s most important veteran players. The Marlins announced on Wednesday that third baseman Martin Prado has re-signed with the team for three years and $40 million.

Miami is also exercising the $2 million option on outfielder Ichiro Suzuki. Not only will the 42-year old Ichiro be back in 2017, but the Marlins added an option for 2018 to his contract, meaning he may have at least two years left in his distinguished career.

“We’re extremely excited that Martin is going to be back,” manager Don Mattingly said at a press conference Wednesday. “It puts another solid foundation block with the foundation that we already have. With Christian (Yelich), with Giancarlo (Stanton), with (J.T.) Realmuto, Dee Gordon. I can keep naming names with that foundation, that core group of players.”

In addition to his productivity on the field, Prado emerged as Miami’s de facto captain this season. His role as a leader on the Marlins was apparent late in the season following the tragic death of pitcher Jose Fernandez, as Prado spoke on behalf of the players at a press conference just hours after learning about such an unspeakable tragedy. He also served as a player-manager during the final game of the regular season.

“Martin showed this year, his leadership, as far as being the glue in that clubhouse,” Mattingly said. “With everything that happened at the end of the season, we obviously saw Martin’s leadership. I think it’s a huge step for us, as we continue moving forward, to be able to re-sign Martin.”

With Prado staying in Miami for the next three years, the Marlins appear to have their infield of the future in place, with Prado at third base, Adeiny Hechavarria at shortstop, Gordon at second base, and Justin Bour at first base. The Marlins also have a talented outfield in Yelich, Stanton, and Marcell Ozuna. Miami also has its fourth outfielder for 2017 in place after exercising Ichiro’s option.

Ichiro was a perfect fit for the Marlins in 2016 while playing in a part-time role. He hit .293 as Miami’s fourth outfielder and collected the 3,000th hit of his big league career on August 7. While he will turn 43 later this month, Ichiro told Marlins president David Samson that he wants to play until he’s 50. “He’s serious,” Samson said Wednesday. “I think he probably will play until he’s 50, and that’s fine by us.”

Mattingly says that age is not an issue with Ichiro. “Let’s dump the age and all of that kind of talk because in Ich, you get a guy who plays all three outfield positions,” he said. “Plays them well. Still throws well. Still runs well. Is productive off the bench. Always prepared. What we got from Ich this year as an extra outfielder, any team in baseball would like that.”