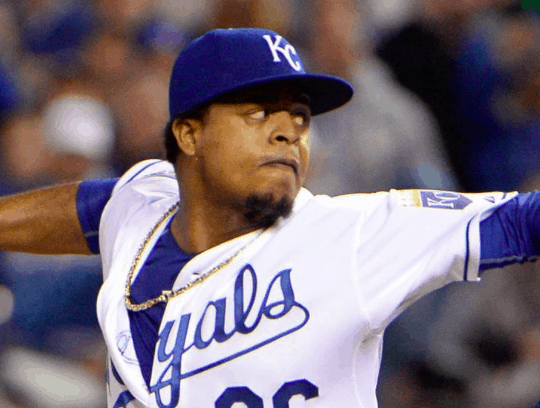 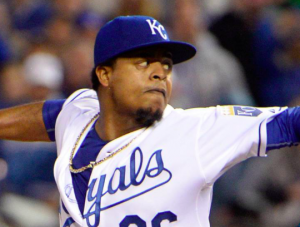 Starting pitching has been a priority for the Miami Marlins all offseason, and while there was speculation the team would trade away core position players in order to add pitching, the Marlins have decided to go the free-agent route, at least for now. Several outlets reported Monday night that the Marlins have agreed to sign starting pitcher Edinson Volquez. The deal is pending a physical and not yet official, but is reportedly for two years and $22 million.

The deal comes a week before the start of the winter meetings, when free agency starts to kick into high gear. The Marlins are also hoping to complete the signing before a possible lockout when the current CBA expires on Thursday, which could put all offseason moves on hold.

The 33-year old Volquez is coming off one of the worst seasons of his career. Last season in Kansas City, Volquez was 10-11 with a 5.37 ERA. However, Volquez has a long track record of being a competent starting pitcher, and the Marlins are betting on him being able to bounce back in 2017. As recently as 2015, Volquez was an important part of Kansas City’s rotation, playing a key role in helping the Royals win the World Series.

Despite a rough season in 2016, Volquez has shown plenty of durability throughout his career. He’s made at least 31 starts in each of the past five years, so even if he doesn’t give the Marlins the kind of performances the team is hoping for, Miami can at least count on Volquez taking the ball every five days and accumulating close to 200 innings over the course of the season. In addition to the innings Volquez figures to throw for the Marlins, he also gives an otherwise young rotation a veteran presence.

The Marlins are hopeful that Volquez can return to his days of at least being a mid-rotation starter and form the core of Miami’s rotation with Adam Conley and Wei-Yin Chen. The Marlins signed Chen to a big contract last offseason, and are hoping he can respond after a subpar year in 2016. Conley, meanwhile, is poised to emerge as one of the game’s best left-handed starters in 2017 after posting a 3.85 ERA in 25 starts in 2016.

Young pitchers like Tom Koehler, Jose Urena, and Jake Esch will compete for the final two spots in Miami’s rotation. However, the signing of Volquez doesn’t mean the Marlins won’t continue to scour the trade and free agent markets for another starting pitcher. Conley figures to be the de facto ace of the staff, but the Marlins lack a true, proven ace following the tragic death of Jose Fernandez in September. This could keep them active in the search for a frontline pitcher as the offseason continues to unfold.

The signing of Volquez will definitely help to stabilize Miami’s rotation next season. He will add depth and help to take some of the pressure off the team’s young starters. However, even if he can rebound from a poor 2016 season, Volquez is still not the bona fide ace that the Marlins need. Miami still needs to continue to pursue a frontline pitcher if the Marlins hope to compete in the NL East in 2017.