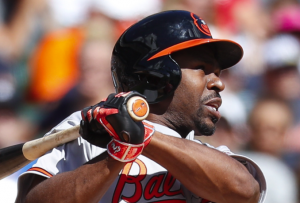 Just a few days after re-signing with the Baltimore Orioles on a minor league contract, Michael Bourn suffered an injury that will keep him out for most of spring training. Bourn is expected to miss the next four weeks because of a broken ring finger. He hurt the finger on Friday while catching a football during team workouts, which in a way, makes the injury even worse.

Bourn has had some difficulty keeping a job in the big leagues over the past couple of years. In the past two years, he’s been traded from the Indians to the Braves, released by the Braves, sign and released by the Blue Jays, signed by the Diamondbacks, and ultimately traded from the Diamondbacks to the Orioles last August. In 24 games with Baltimore late last season, Bourn become a solid contributor, .283 with a .793 OPS.

With all of his ups and downs over the past two years, Bourn was unable to land a major league contract this winter. However, the Orioles have welcomed him back on a minor league deal that will pay him a $2 million salary if he can make the opening day roster. Of course, that will be much harder to do if he can’t participate in any spring training games for the next four weeks.

Before the injury, returning to the Orioles seemed like a smart career move by Bourn. Baltimore has roughly a dozen outfielders in camp, but few of them are established big league regulars, potentially giving Bourn the upper hand. Adam Jones is locked into center field, but he’s the only sure thing in Baltimore’s outfield at the moment. Seth Smith and Hyun Soo Kim are penciled into the corner outfield spots, but both will face plenty of competition for their spot during spring training.

Perhaps more importantly, both Smith and Kim are left-handed hitters who are likely to end up in a platoon. Bourn excelled last year in hitting left-handed pitchers from the right side of the plate, giving him a great chance to earn a spot on Baltimore’s roster as a reserve outfielder and platoon partner with either Smith or Kim.

Of course, if Bourn can’t play in any spring training games for the next four weeks, it could be difficult for him to earn a spot on the team. The Orioles are obviously familiar with what he’s capable of doing, but if some of their other outfield candidates perform well during the spring, they may prefer to go with one of their younger players rather than pay Bourn a $2 million salary.

Another possible complication is the out in Bourn’s contract if the Orioles haven’t added him to the major league roster by March 25. It’s unclear whether or not Bourn will have returned from the injury by that point. However, both Bourn and the Orioles may be willing to expedite his return as much as possible. “If we had to push the envelope, we could,” said Baltimore manager Buck Showalter.

The manager’s comment seems to indicate that the Orioles would like to see Bourn earn a spot on the opening day roster. However, that could be tough to guarantee if he ends up missing most of spring training, which now appears likely after being sidelined with a broken finger.