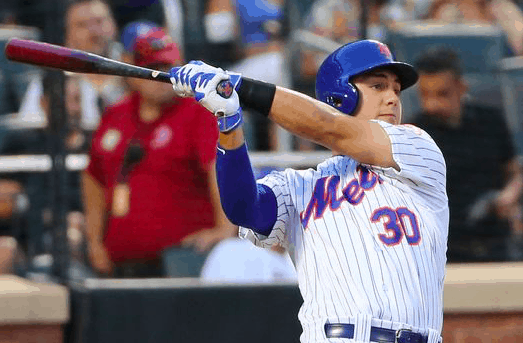 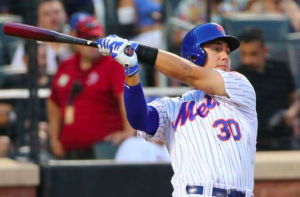 One of the biggest question marks facing the New York Mets at the start of spring training is what to do with outfielder Michael Conforto. With Yoenis Cespedes, Curtis Granderson, and Jay Bruce all in the picture, there’s no room for Conforto in the outfield if the Mets want him to get regular at bats. The logjam could force the team to send him back to triple-A at the start of the season. But if the first game of spring training is any indication, Conforto is not going to make things easy on the Mets.

During Friday’s spring opener against the Boston Red Sox, Conforto went 2 for 3 at the plate. Those two hits were a solo home run to right field and an opposite field single against a left-handed pitcher. It’s just one game, but it’s a promising start for a young player who was outstanding last April but couldn’t remain consistent throughout the entire season.

“That’s the start we were looking for,” Conforto said after Friday’s game. “It’s Game 1 and I definitely want to get off on the right foot. It felt good to get a couple hits and put some runs on the board.”

The home run will draw people’s attention, as Conforto absolutely crushed the ball against veteran Kyle Kendrick. However, the single against lefty Henry Owens may be equally important for Conforto. The Mets view him as an every day player, at least eventually, but he hit a dismal .104 against southpaws last season, and was just 3 for 14 against lefties during his rookie season in 2014.

“It’s definitely something I need to work on,” Conforto said about facing lefties. “I was happy to get that first one and was happy it was a left-hander starting. That’s a good opportunity for me and I’m looking forward to more of them.”

Mets manager Terry Collins says he has already noticed a change in Conforto from last season, calling his swing “much, much better than I saw last year.” However, Collins acknowledged at the start of camp that Conforto could have an outstanding spring and still have a hard time making the opening day roster.

“He’s got to show that he belongs back in the big leagues,” Collins said. “It’s all about confidence. Having a good first day rebuilds that confidence, no doubt.”

With Granderson and Bruce also being left-handed hitters, there’s little chance of Conforto being part of a platoon, as the Mets certainly won’t have him split time with Cespedes. Conforto also doesn’t have the defensive skills to beat out Juan Lagares as the team’s fourth outfielder. But Conforto insists that he’s not focused on his rather narrow path to making New York’s opening day roster.

“I don’t feel the pressure,” Conforto said. “My job is just to go out there and work hard, work on things that I know I need to work on, and just be a better player at the end of spring. Stay healthy. I wouldn’t say I’m really feeling that pressure. I think I just need to go out there and play the game, have fun, and the rest will take care of itself.”

Conforto certainly has the right attitude about his chances of making the team. Of course, the only thing that could make a difference is his performance on the field. Fortunately for Conforto, after one game, his performance has matched his attitude, potentially leaving the Mets with a difficult decision to make at the end of spring.