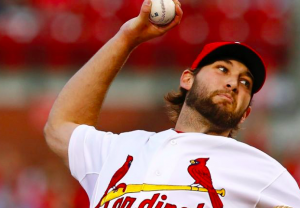 After enduring injuries all season, the St. Louis Cardinals finally appear to be getting healthy with less than three weeks left in the regular season. The latest member of the Cardinals to return is pitcher Michael Wacha, who was activated from the DL on Wednesday. Wacha hasn’t pitched since August 8 due to shoulder inflammation, but he is now back and will pitch out of the St. Louis bullpen for the rest of the season.

Wacha has posted rather modest numbers this season, going 7-7 with a 4.45 ERA across 23 starts. Nevertheless, the Cardinals will be glad to have him back, especially if he’s able to add some depth to the back end of their bullpen. Wacha spent part of his rookie season in 2013 pitching out of the bullpen, so he should be able to adjust quickly to the new role.

He may soon be joined in the St. Louis bullpen by another pitcher working his way back from injury, Trevor Rosenthal. After beginning the season as the team’s closer, Rosenthal endured profound struggles throughout June and July before eventually being placed on the DL in late July with shoulder inflammation. His struggles and eventual absence created a rather large hole in the St. Louis bullpen.

However, Rosenthal threw a simulated game on Tuesday and is expected to be activated from the DL within the next few days, giving the St. Louis bullpen another proven pitcher capable of closing out games.

Backup catcher Brayan Pena faced both Wacha and Rosenthal in simulated games earlier this week and offered high praise of both. “That was elite stuff I saw from him,” Pena said about facing Rosenthal on Tuesday. “(Wacha) also looked very good. All of his pitches were down. He had some good arm speed. Everything was coming out of his hand with a lot of velocity, and that’s good. He had good extension, was letting it go and wasn’t shy about any pitches. It was like he hadn’t missed a beat.”

With Wacha, and eventually Rosenthal, added to the mix, the St. Louis bullpen could take on a whole new look, especially with Seung Hwan Oh continuing to pitch well in the closer’s role. The return of Wacha and Rosenthal may also help the Cardinals move rookie Alex Reyes, who has become a shutdown reliever, back into the starting rotation. The Cardinals may consider putting Reyes into Jaime Garcia’s spot in the rotation. Garcia has struggled mightily for the past month and lasted just 1.2 innings on Tuesday against the Chicago Cubs.

Wacha’s return from the DL also comes on the heels of shortstop Aledmys Diaz returning from the DL on Monday. Diaz made an instant impact, hitting a home run during Tuesday’s win over the Cubs. His presence at shortstop should help to stabilize the St. Louis infield, which has undergone a great deal of shifting this season in order to cope with a multitude of injuries. The Cardinals are also holding out hope that Matt Holliday will be able to return from a broken thumb before the end of the regular season.

Heading into Wednesday, the Cardinals are half a game behind the New York Mets for the second wild card spot, but just one game behind the San Francisco Giants for the top wild card spot in the National League. Considering the volume of injuries St. Louis has endured this season, the Cardinals should feel grateful to be in the thick of the playoff hunt at this point in the season.

With Diaz and Wacha back, and with Rosenthal, and possibly Holliday, close to returning as well, the Cardinals appear to have weathered the storm of injuries that threatened to derail their season time and time again. The Cardinals are starting to get healthy at the right time of year, giving them a wonderful opportunity to claim a spot in the postseason over the final three weeks of the season.