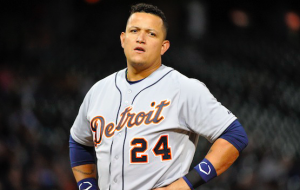 The Detroit Tigers placed first baseman Miguel Cabrera on the 10-day DL Saturday due to a strained right groin. Cabrera suffered the injury Friday night after diving to field a ground ball. He later re-aggravated the injury stretching to receive a throw at first base, prompting the Tigers to remove him from the game. Detroit has called up catcher John Hicks to take Cabrera’s spot on the active roster. This is just the second time in his career that Cabrera has been placed on the DL.

In addition to leaving Friday’s game with the groin injury, Cabrera was also removed from a game earlier this week with tightness in his back, an issue that has bothered him since returning from the World Baseball Classic. Spending at least 10 days on the DL may afford Cabrera the opportunity to recuperate from any and all ailments that have plagued him early in the season, which could be best for both him and the Tigers in the long run.

That being said, Cabrera’s injury comes at an inopportune time for the Tigers. Heading into Saturday, the Tigers have lost four games in a row, a stretch that has cost them possession of first place in what is currently a tight and competitive AL Central. The Tigers are also missing several other key players from their lineup. J.D. Martinez is yet to return after starting the season on the DL. Detroit is also without shortstop Jose Iglesias, who was placed on the DL on Friday because of a concussion.

Perhaps more importantly, Cabrera has gone to the DL just as he was starting to heat up offensively. The two-time MVP started the season with just three hits in his first 28 at-bats. He finally started to catch fire a little over a week ago, including three hits in Friday’s game before the groin strain forced him to exit. With Cabrera going down just as he was starting to hit and Martinez still not back from his injury, Detroit’s lineup is looking rather thin and void of players who can change a game with one swing.

While Cabrera is on the DL, Hicks and Alex Avila figure to get most of the time at first base, although both are catchers by trade, as the Tigers don’t have a true first baseman on their roster who can back up Cabrera. Avila is off to a fast start offensively this year as the team’s backup catcher, and so he could help to make up for Cabrera’s absence if he can stay hot. Hicks, meanwhile, has limited at-bats in the majors but was hitting .424 through his first 10 games at triple-A before being called up.

The injury to Cabrera coming on the heels of a four-game losing streak may force the Tigers to change their mental approach early in the season. Instead of trying to take advantage of what has been a mediocre division throughout April, the Tigers may not be looking to just tread water until they can get healthy. Detroit is obviously hopeful that Cabrera will be quick to recover, but at age 34, the team may have to be a little cautious with the 11-time all-star, so he may be out of action for more than 10 days.

With inconsistency from their starting rotation and injuries to the likes of Cabrera, Martinez, and Iglesias, the Tigers are in rough shape at the moment. If they can get healthy and start clicking on all cylinders, the Tigers have the talent to challenge for the top spot in the AL Central. But at the moment, Detroit is far from full strength and doesn’t look like a team that’s ready to ascend to the top of the division.