Mike Leake to Return to Cardinals on Wednesday 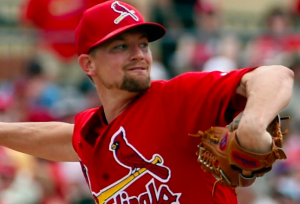 The St. Louis Cardinals are finally starting to get some good news on the injury front. The team announced Monday that starting pitcher Mike Leake is ready to return from his bout with shingles and will start on Wednesday against the Pittsburgh Pirates. Leake threw a 40-pitch bullpen session on Sunday without any issue, making the Cardinals comfortable with the idea of putting him back in the starting rotation for the stretch run.

Leake hasn’t pitched since August 21 when he tossed seven shutout innings against the Philadelphia Phillies. He’s been a steady presence in the St. Louis rotation all season, even amidst a series of other injuries the team has endured, including starting pitcher Michael Wacha, who remains on the DL.

Leake says that while he was recovering from the shingles virus he lost five pounds. He adds that he is still dealing with some fatigue issues, but doesn’t believe it’ll be a factor when he steps on the mound Wednesday. “I’d still say there is a little energy to gain, but I think I’m at a high enough level to where this shouldn’t affect me too much,” Leake said. “I’m trying to get it out there and get my strength back. That’s where I am right now — trying to get as healthy as I can so I can help these guys.”

With Leake moving back into the rotation, the Cardinals will be moving rookie Alex Reyes back to the bullpen. The 22-year old Reyes made two starts while Leake was on the DL, posting a 2.53 ERA and taking two no-decisions. Prior to that, he pitched 9.1 innings out of the St. Louis bullpen without giving up a run. Cardinals manager Mike Matheny says when Reyes moves back to the bullpen, he will be one of the team’s late-inning relievers.

“I think he’s flexible in the fact that we get him in where he could pitch in the back end of the game and pitch multiple innings, which you don’t see a whole lot of,” Matheny said. “I think he’s earned that [opportunity] where we’ll put him in just about any position.”

Seung Hwan Oh is currently the closer in St. Louis, although the Cardinals could use more options in the back end of their bullpen with Trevor Rosenthal on the DL. Rosenthal threw a bullpen session on Monday and is making progress towards a return, although he’s posted a 5.13 ERA in 40 appearances this season. This could make Reyes a key figure in the bullpen heading down the stretch.

The Cardinals enter play Tuesday a game ahead of the New York Mets for the second wild card spot in the National League, but just half a game behind the San Francisco Giants for the top wild card spot. This puts the Cardinals in good shape with regard to a postseason spot with a few weeks left in the season. With Leake rejoining the rotation and Reyes moving to the bullpen, the Cardinals have improved their pitching staff, and the healthier they get, the better they look to secure a spot in the playoffs.