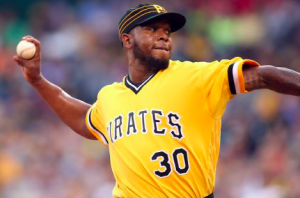 The Milwaukee Brewers are very much in rebuilding mode and may find it difficult to compete in 2017. But that hasn’t stopped them from venturing into the free agent pool and spending some money to improve their team for the upcoming season. The Brewers announced Thursday that they have agreed to a one-year deal with reliever Neftali Feliz. The deal is worth $5.35 million with an additional $1.5 million possible with incentives.

The Brewers have not been shy about trading relief pitchers in order to collect prospects during their rebuilding effort. Milwaukee traded both Jeremy Jeffress and Will Smith last summer, and earlier this winter, the Brewers traded Tyler Thornburg to the Boston Red Sox. Those trades have left a vacancy in the backend of Milwaukee’s bullpen, a vacancy the team believes Feliz will help to fill in 2017.

“We are excited to add a pitcher with Neftalί’s stuff to the back end of our bullpen,” Brewers GM David Stearns said Thursday after the deal was made official. “Neftalί has a long pedigree of getting high-leverage outs, and we believe he has the capability to help anchor our young relief corps.”

Feliz spent the first six and a half years of his career with the Texas Rangers, including stints as the team’s closer. However, the Rangers cut ties with him in the middle of the 2015 season when his numbers began to drop off. He finished the 2015 season with the Tigers before bouncing back in a setup role with the Pirates in 2016.

The 28-year old Feliz has certainly gone through some ups and downs over the past couple of seasons. He also missed the last month of the 2016 season due to what the Pirates called “biceps fatigue,” and he did not participate in winter ball in his native Dominican Republic this year. But those past issues don’t appear to be a concern for the Brewers.

“We saw some things last year in his repertoire, in his stuff, in his usage, that we thought were positive trends,” explains Stearns. “We think he threw the ball very well last year. We think there’s still room for growth for him. We think he’s going to be a very nice addition to the back end of our ‘pen.”

Feliz is likely to get a chance to close with the Brewers in 2017, which was likely a factor in him choosing to sign with Milwaukee. However, the Brewers appear set to have an open competition for the closer’s job during spring training.

“He’s certainly a candidate (to close),” said Stearns. “The fact that he has previous closing experience — our other candidates do not at this point — does give us confidence in him. But we’re going to go into spring training with the same notion as last year. We have multiple guys we’re going to think about in the context of that role.”

Carlos Torres, Corey Knebel, and Jacob Barnes are likely to be the top competitors for the closer’s job alongside Feliz. The trio has just seven career saves combined, whereas Feliz has 99, although 74 of those came prior to 2012. Nevertheless, if Feliz is healthy, he will be the favorite to win the job as Milwaukee’s closer. Having a pitcher with his experience in the 9th inning should help the Brewers close out games this season, something they’ll have to do if they have any hope of remaining competitive in 2017, making Feliz an important signing.