Everyone has their own opinion in regards to the recent police-involved shootings and are free to do or say as they see fit. It is the right of every American citizen and one that should not be overlooked. However, at the same time, in doing so we should be aware of how our opinion may affect our relationship with others going, personally and professionally.

That’s not to say that anyone should hold back for fear of alienating or offending someone, but that we should be respectful (or mindful) of how others feel about our opinion and be ready to deal with the consequences if they don’t like it. 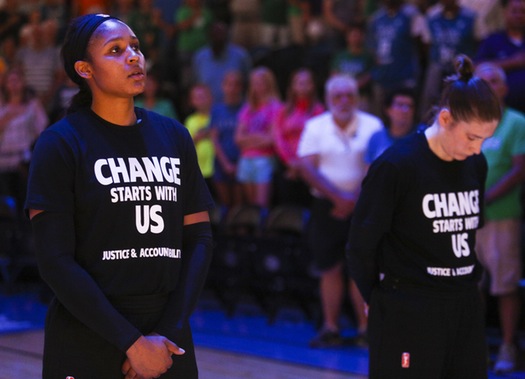 The Minnesota Lynx certainly will after the players decided to make a small demonstration Saturday night in support of the shooting victims.

According to a report in the Star Tribune, the players held a press conference to denounce racial profiling, and they wore special t-shirts during warm-ups that read “Change Starts With Us” and “Justice & Accountability.”

The back of the shirt had the Philando Castile’s and Alton Sterling’s names as well as “Black Lives Matter” and a Dallas PD emblem.

After the press conference and seeing the t-shirts, four off-duty police officers working the game decided they didn’t want to be there anymore. So they left.

Lt. Bob Kroll, president of the Minneapolis Police Federation, has commended the officers for taking their own stand. He told the Star Tribune that four other officers have removed their names from the list to work future games.

“Others said they heard about it, and they were not going to work Lynx games,” he said.

No big deal, right? So someone else will work the game instead—right? Maybe, maybe not, according to Kroll:

“If [the players] are going to keep their stance, all officers may refuse to work there.”

When asked about the number of officers leaving the game, Kroll responded with a dig at the team: “They only have four officers working the event because the Lynx have such a pathetic draw.”

The Lynx are one of the better teams in the WNBA and had a little over 7600 fans at Saturday’s game.

Officers have the option to sign up to work events like games for the WNBA team. They work these events on their own time as independent contractors. They are not required to work them or mandated to just because they are cops.

To be fair to the players, they did not just recognize the lives of the two men shot by police. They recognized the police officers in Dallas as well.

During the press conference, Lynx forward Rebekkah Brunson said the players were “wearing shirts to honor and mourn the loss of precious American citizens and to plead change for all of us.”

It’s hard to argue with that, but what the officers likely took issue with was this stance: “We are highlighting a longtime problem of racial profiling,” said forward Maya Moore.

Racial Profiling is defined by the ACLU as the discriminatory practice by law enforcement officials of targeting individuals for suspicion of crime based on the individual’s race, ethnicity, religion or national origin.

While it has been an issue in the past and may or may not be an issue in the recent cases, it is not hard to see why the officers would be unhappy with the players making the general accusation. Comments like the ones the players made make it sound as if every officer is guilty of doing it.

Who wants to work for a team that has players making that kind of insinuation?

In response to the officers leaving, the Lynx have released a statement:

“While our players message mourned the loss of life due to last week’s shootings, we respect the right of those individual officers to express their own beliefs in their own way. At no time was the safety of our game in question as Target Center staffs extra personnel for each and every game. The Lynx and the entire WNBA have been saddened by the recent shootings in Dallas, Baton Rouge, and St. Paul. We continue to urge a constructive discussion about the issues raised by these tragedies.”