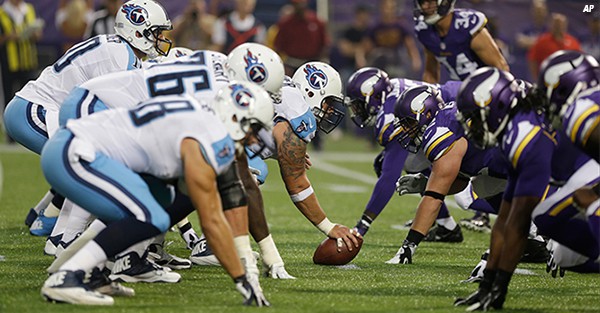 Vikings start the season vs the Tennessee Titans.

One of the early games on the Sunday slate of Week 1 pits the Minnesota Vikings and Tennessee Titans. While it’s still May, it’s never too early to get ready for the upcoming 2016 NFL season. Who has the best odds of coming away with a 1-0 record from this matchup? A preview and prediction are below.

These two teams did a fantastic job this offseason retaining talent already on the team, as well as adding new faces that could take them to new levels.

Minnesota last year, obviously, was a much better team than the Titans. Defensively, the Vikings are one of the best units in the league, and got better with the additions of Griffin and Alexander to the secondary. Offensively, they improved even more in key areas and they have now probably the deepest offensive line in the league, retaining all of their starters from a year ago, getting two back from injury and adding both Boone and Smith in free agency. Suffice to say, an injury to the line this year won’t be so detrimental, which is great news for Adrian Peterson and Teddy Bridgewater alike.

Bridgewater also has a brand new target in Treadwell, who fell all the way to No. 23 for them to snatch up. The rookie will be a perfect compliment to the speedy Stefon Diggs, who emerged as the No. 1 target in Minny last season. Throw in a healthy Kyle Rudolph, and as long as Bridgewater keeps maturing in his game — now entering his third season in the NFL — the offense has a real chance to be balanced and potent in 2016.

Meanwhile, Tennessee needed some help this offseason, clearly. They were awarded the No. 1 pick in the draft for their inept two-win season a year ago, and wisely shipped that pick to Los Angeles for a plethora of draft selections. The Titans used those picks well, taking four true difference-makers (two on each side of the ball), and also brought in a proven wideout in free agency to help Marcus Mariota. The second-year quarterback will be key to the Titans’ future, but the immediate success of the team will be determined by how much the defense can improve.

Mike Mularkey, the now-official head coach of the Titans after serving under the interim title for the final nine games last season, made some wise decisions along with the rest of the front office. Three of their first four picks of the draft were offensive and defensive linemen, which is where young, struggling teams need to improve the most, generally.

Dodd and Johnson have the difficult tasks of locking down the front of the defense in their rookie seasons, but they should be ready for the task. Both are powerful, physically imposing presences, and will help the defense mightily.

Also, look for Murray, Henry and Conklin to bring a different culture to the Titans offense, which will help the defense as well. A new-look, power-run scheme could do wonders for that offense, protecting both Mariota from hits and the defense from tire. But will all of that be enough to take on the Vikings in Week 1?

Odds are, most likely not. The key to what drives the Vikings’ dominant defense is the strength of their front four. While the young Titans may have an exciting future offensively, we won’t see too much of that potential shine in this one.

Prediction: The Titans may have improved the most between these two teams this offseason, but the Vikings are a complete squad coming off of a playoff appearance. Tennessee also has the benefit of playing at home, but it simply won’t matter this early in the season, as the young talent won’t have had enough time to gel together. Take the under for this game, and feel confident that Minny will cover.