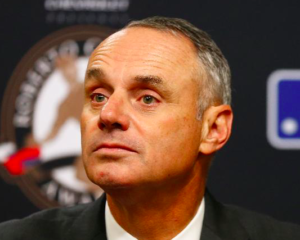 As gambling continues to evolve, it becomes more and more interwoven with the sports world. Yet, outside the state of Nevada, sports gambling remains illegal. However, there are reasons to be optimistic that sports gambling will one day become legal nationwide. NBA Commissioner Adam Silver has long led the charge in trying to push for legal and regulated gambling on sporting events, but not far behind him is MLB Commissioner Rob Manfred.

Manfred, who has indicated in the past that MLB was re-evaluating its stance on gambling, was asked about the topic while appearing on ESPN’s Mike and Mike Monday morning.

“I think (Silver) has done a nice job of making people aware that the landscape on sports gambling is changing around us, has changed dramatically. And in part in response to his comments but in response to just general developments in the area, we’ve begun a conversation with the owners. It’s educational at the begging, in the sense in that sports gambling has changed a lot. I mean, you know the old division of betting illegally with a bookie somewhere is not today’s world.”

Manfred makes an interesting point. The days of shady bookies making back-alley deals are no longer how sports gambling works. Nowadays, anyone can place a bet on just about any sporting event, and they can do so from any place. Shutting down illegal sports gambling would be next to impossible for all intents and purposes, and so in a lot of ways, it would make sense to legalize it and regulate it in a way that incorporates the preferences of each of the major sports leagues.

Of course, Manfred doesn’t necessarily have avid gamblers in mind. In the past when he’s discussed sports gambling, Manfred has mentioned it as a way to improve fan engagement. Baseball is fighting to attract young demographics to the sport, and being able to incorporate legal sports gambling in addition to the growth of daily fantasy sports could be massive for the game’s popularity both in the short term and in the future.

Regardless of his reasons for pushing legalized sports gambling, Manfred appears to be positioning himself side by side with Silver on the front lines of the fight, a drastic change from baseball’s historic stance on gambling. Manfred has shared that the league has done research on gambling and is taking concrete steps toward at least having a dialogue about legalized gambling.

“We’ve begun a conversation,” Manfred told Mike and Mike, “educating people about what’s out there, what sports leagues in other countries have done, in an effort to make sure Major League Baseball is ready to join in what I think is going to be a dialogue about how sports gambling regulation in the United States should be changed.”

Manfred has been bullish on having a major league team in Las Vegas as a way to push towards legalized sports gambling, especially with the NFL and NHL both having franchises in Sin City within the next year. However, MLB’s Commissioner knows that having a presence in Las Vegas is not a pre-requisite for making sports gambling legal. The thinking on sports gambling continues to change nation-wide and the commissioners of the major sports, including Manfred, are now open-minded to making it legal.